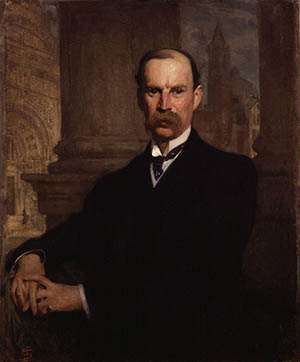 Sir Aston Webb, RA, FRIBA, (May 22, 1849 – August 21, 1930) was an English architect, active in the late 19th century and at the beginning of the 20th century. He was President of the Royal Academy 1919-1924. The son of a water-colour painter (and former pupil of landscape artist David Cox), Edward Webb, Aston Webb was born in London and received his initial architectural training articled in the firm of Banks and Barry from 1866 to 1871, after which he spent a year travelling in Europe and Asia. He returned to London in 1874 to set up his own practice.

From the early 1880s, he joined the Royal Institute of British Architects (1883) and began working in partnership with Edward Ingress Bell (1836-1914). Their first major commission was a winning design for the Victoria Law Courts in Birmingham (1886), the first of numerous public building schemes the pair designed over the next 23 years. Towards the end of his career Webb was assisted by his sons, Maurice and Philip. Ralph Knott, who designed London’s County Hall, began his work as an apprentice to Webb executing the drawings for his competition entries.

He served as RIBA President (1902-1904) and, having been elected as a full member of the Royal Academy in 1903, served as acting president from 1919 to 1924. He was knighted in 1904, received the Royal Gold Medal for Architecture in 1905 and was the first recipient of the American Institute of Architects Gold Medal in 1907. One of his earliest works was built for the Six Masters of The Royal Grammar School Worcester in 1877. These almshouses are in the Arts and crafts style, different from his later work.

Webb’s first major work was the restoration of the medieval St Bartholomew-the-Great in Smithfield, London. His brother Edward Alfred Webb was the churchwarden at the time, and his association with the church probably helped the young architect get the job. In London, Webb’s best known works include the Queen Victoria Memorial and The Mall approach to, and the principal facade of, Buckingham Palace, which he re-designed in 1912. He also designed the Victoria and Albert Museum’s entrance facade (1891) and ceramics galleries (1909), the Royal United Services Institute, Whitehall (1893-1895) and – as part of The Mall scheme – Admiralty Arch (1908-1909). He also designed the Britannia Royal Naval College, Devon, where Royal Naval officers are still trained. He enlarged and sympathetically restored the perpendicular Church of St John Baptist, Claines, Worcester, finishing in 1886. Nearby he was also responsible for the new church of St. George, consecrated in 1895, which replaced an earlier smaller building in St. George’s Square, Barbourne, Worcester. With his partner Ingress Bell, he extended St Andrew’s Church, Fulham Fields (London), remodelled the chancel and built the Lady Chapel.

Residential commissions included Nos 2 (The Gables) and 4 (Windermere) Blackheath Park, in Blackheath, south-east London. He also designed (1895-6) a library wing, including the Cedar Library, at The Hendre, a large Victorian mansion in Monmouthshire, for John Allan Rolls, first Lord Llangattock.

The central building of Chancellor’s Court at the University of Birmingham, UK was designed by Webb and Ingress Bell and named after Aston Webb. It includes the Great Hall. The main feature is a large dome that sits atop the building.