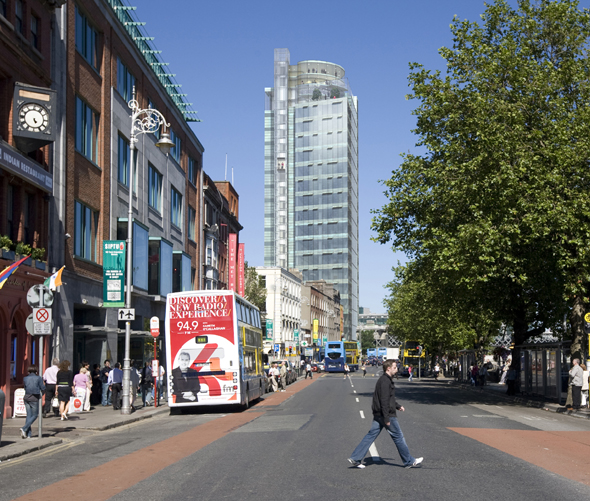 Liberty Hall is to be replaced by a significantly taller building with a “sky pod” on top similar to the Gravity Bar at the Guinness Storehouse, to give visitors panoramic views over the city and Dublin Bay. Siptu unveiled details of the proposed development today at an annual conference marking the trade union’s centenary, pledging that the new Liberty Hall would have a “wow factor” second to none in the capital.

Designed by Gilroy McMahon Architects, who were also responsible for Croke Park, the facilities would include a 300-seat theatre at lower ground level, a heritage centre illustrating Siptu’s history and 15 floors of open-plan office space. The existing 17-storey building, which is 60 metres (198 feet) tall, would be replaced by a 20-storey tower rising to a height of 84 metres (277 feet), with a glass-fronted “sky lift” to take visitors to an enclosed observation terrace at the top.

Unlike the present tower, which has square floorplates, the new one would be trapezoid in shape “” although the architects have sought to ensure that the relative proportions of its height and bulk would yield a satisfactory “slenderness ratio”. After carrying out shadow studies to measure the impact of the proposed tower on nearby buildings as well as extensive consultations with Dublin City Council’s planners, they even shaved two metres off every floor to produce a better result.