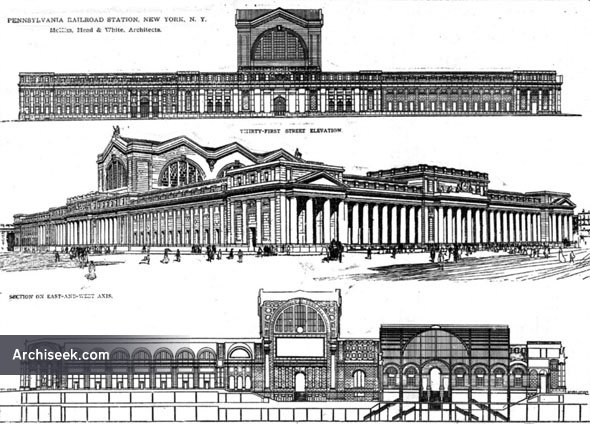 An imposing, sober colonnade of corinthian columns arranged in Doric order, McKim, Mead and White’s Pennsylvania Station combined glass-and-steel train sheds and a magnificently proportioned concourse with a breathtaking monumental entrance to New York City. It was immortalized in films (see link below). From the street entrance modelled after Berlin’s Brandenburg Gate, led to the two railroads that the building served, the Pennsylvania and the Long Island Rail Road. Its enormous main waiting room, inspired by the Roman Baths of Caracalla, approximated the scale of St. Peter’s nave in Rome, expressed here in a steel framework clad in travertine. It was the largest indoor space in New York City. The station saw its heaviest usage during World War II, but by the late-1950s intercity rail passenger volumes declined dramatically with the coming of the Jet Age and the Interstate Highway System.

The Pennsylvania Railroad began looking to divest itself of the cost of operation of the under-utilized structure, optioning the air rights of Penn Station in the 1950s. Plans for the new Penn Plaza and Madison Square Garden were announced in 1962. In exchange for the air-rights to Penn Station, the Pennsylvania Railroad would get a brand-new, air-conditioned, smaller station located completely below street level at no cost, and a 25% stake in the new Madison Square Garden Complex.

The demolition of the original structure “” although considered by some to be justified as progressive at a time of declining rail passenger service “” created international outrage. As dismantling of the grand old structure began, The New York Times editorially lamented: “Until the first blow fell, no one was convinced that Penn Station really would be demolished, or that New York would permit this monumental act of vandalism against one of the largest and finest landmarks of its age of Roman elegance.”