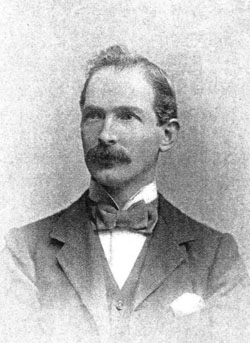 James Glen Sivewright Gibson was born in Arbroath on 23 November 1861, the son of William Gibson and Elizabeth Sivewright and the brother of Robert Gibson, civil engineer and architect, Dundee. He was articled to Ireland & Maclaren, Dundee, from 1877 to 1881, and was thereafter a draughtsman with Pearce Brothers, engineers, and then with Alexander Hutcheson. He then moved to London and worked for William Wallace, Harry Wilkinson Moore, and finally Thomas Edward Collcutt. At some point he travelled in France and Italy before commencing practice and passing the qualifying exam, both in 1889. He was admitted ARIBA, his proposers being the Dundee architect John Murray Robertson, Collcutt and James Brooks. In that year he commenced independent practice.

After Skipwith’s death in France during the Great War, the practice continued thereafter as Gibson & Gordon. Gibson died on 27 March 1951 at the age of ninety. He had a remarkable record of success in competitions, beginning with the LCC hostel in Drury Lane, London in 1891, the West Riding Offices in Wakefield, 1894, and the West Ham Technical College in 1895.