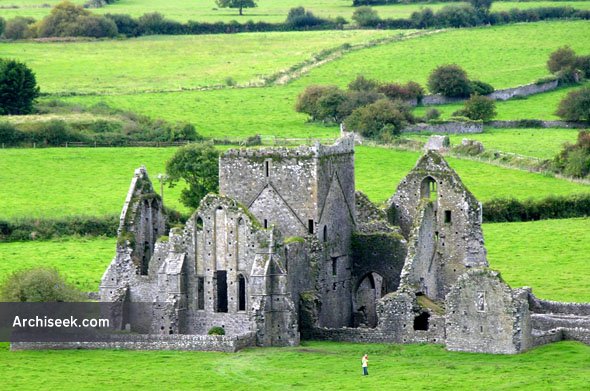 Hore Abbey is a ruined Cistercan monastery near the Rock of Cashel, County Tipperary, Republic of Ireland. Hore Abbey is distinctive among Irish Cistercian monasteries in that the cloister lies to the north. The siting of the Abbey, with the Rock of Cashel close by to the north, may explain this departure from the usual arrangement. A former Benedictine abbey at Hore was given to the Cistercians by Archbishop David MacCearbhaill (in 1272), who later entered the monastery. He endowed the Abbey generously with land, mills and other benefices previously belonging to the town. The church consisted of a nave, a chancel and two transepts, each of which originally had two chapels. In the 15th century, the tower was added and some alterations to windows and the choir.