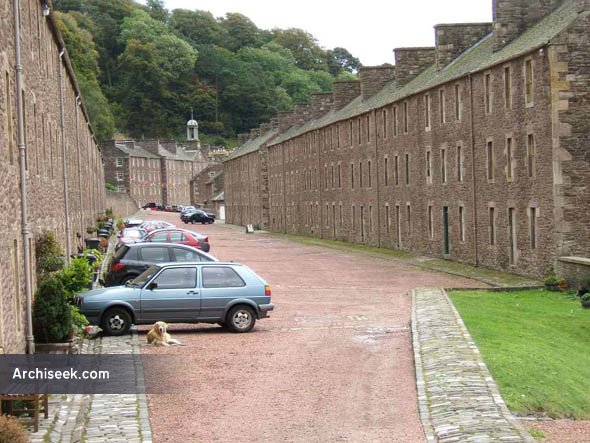 The Scottish Culture Minister, Michael Russell, has visited New Lanark to see the digital documentation of the world heritage site taking place. A team from Historic Scotland and Glasgow School of Art began scanning the site this month as part of the Scottish Government’s project to digitally document the country’s five World Heritage Sites, and five international heritage sites, creating what will be known as the Scottish 10.

The Minister said: “The Scottish 10 is a groundbreaking project which will provide us with 3D visual documentation of Scottish historical landmarks. It is a project which will allow us and our partners, such as New Lanark Trust, to engage with cutting edge laser technology to interpret and record Scotland’s most important and iconic sites. “I am delighted to see that work is underway on our first Scottish site which, already has gathered some impressive image data, and know that the material will assist the Trust in continuing to inform and educate people about the historical and cultural importance of New Lanark.”

Dr Jim Arnold, Director, New Lanark Trust, said: “New Lanark is such an iconic location with a rich history influenced by mill owner and social pioneer Robert Owen whose ideas and thinking were far ahead of their time. I’m pleased that New Lanark has been chosen to be part of such an innovative and technically advanced project to record the natural and built environments of this unique site. ” Douglas Pritchard, Head of Visualisation, Digital Design Studio at the Glasgow School of Art, said: “As with all the “˜Scottish 10′ sites, the objective of the New Lanark project is to create the definitive 3D record of the architecture and surrounding countryside. By using the most advanced laser scanning technology, we are able to develop an exceptionally accurate, down-to-the-millimetre, three-dimensional archival record of the New Lanark site. The results of this project – three-dimensional models, animations and illustrations – will be used to digitally preserve the site should it ever need to be repaired due to fire damage, flood or other disaster. ”

The scanning team is expected to be at New Lanark until mid-September and will unveil the final scanned images later this year. Inscribed as a World Heritage Site by UNESCO in 2001, New Lanark was is one of five World Heritage Sites in Scotland along with The Antonine Wall, St Kilda, Heart of Neolithic Orkney, and the Old and New Towns of Edinburgh. The cutting edge laser technology can survey and interpret heritage structures in 3D and provides a lasting, digital record of the country’s most important buildings. It also offers a new method for researching and conserving Scotland’s built environment and the collaboration of Historic Scotland and Glasgow School of Art has already seen the technology used on Rosslyn Chapel and Stirling Castle.