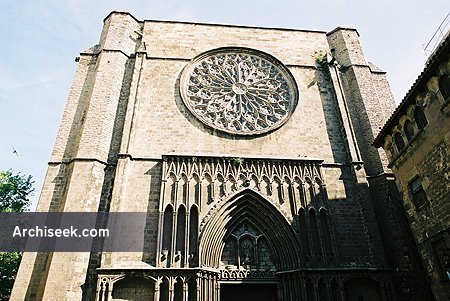 An austere Gothic church in a small plaça in the Barri Gà²tic area of the old city, the only concession to exterior decoration on the exterior is the massive rose window and doorway on the west front. This is quite typical of Catalan Gothic which eschews external ornament. Dedicated to the Virgin Mary, the church gets its full name from a pine tree that was once here.

The interior is vast and dark. The nave is over 56feet wide and there are two rows of chapels between the external buttresses giving the building its curiously rectangular appearance. Originally the interior had many works of art, many from the 14th century but most of these were lost during the Spanish Civil War.