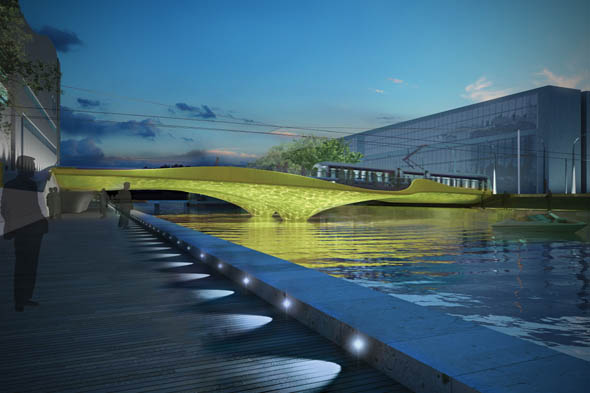 The new Spencer Dock bridge in the Dublin docklands won the Best Structural Design prize at a Leaf (Leading European Architects Forum) awards ceremony in Berlin last night. The awards, now in their sixth year, are given to those who “have made an outstanding contribution to the world of architectural design” and for buildings that set benchmarks.

“It is great to get a structural award because the structure was where the innovation lay in this bridge,” said Amanda Levete of Amanda Levete Architects who worked on the sculptural bridge with Arup engineers.

Also on the structural award shortlist was a glass staircase in the National Bank of Denmark by Dissing + Weitling Architecture, and a timber tower in east London by Waugh Thistleon Architects. “The shortlisted structures all really pushed out the boat technically and it was a real honour to win,” said Ms Levete.

Two other Irish projects shortlisted in the Leaf awards, run by the Arena International Events Group, were in the public building category. The new Westmeath County Council offices by Bucholz McEvoy Architects and the Wexford opera house by Keith Williams Architects and the Office of Public Works were up against strong competition. This included the restoration of the Neus Museum in Berlin by David Chipperfield Architects and Julian Harrap Architects, and the Zaragoza Bridge Pavilion in Spain by Zaha Hadid Architects. The winner was a community centre by GPY Arcquitectos based in Tenerife.