On announcing the winning entry, Frank Allen, Chief Executive of the Railway Procurement Agency said; “The conclusion of this competition represents a significant milestone in the ongoing design and development of the Metro West scheme. RPA is committed to developing infrastructure that meets transport needs but is also attractive and sympathetic to its environment. The competition entries were of exceptionally high standard and sought to develop proposals that meet these requirements. The jury concluded that the winning design excelled in meeting the challenges of the brief and in the view of RPA is the most appropriate design for Metro West to cross the Liffey Valley. RPA looks forward to pursuing this design to successful implementation as part of the delivery of Metro West.” 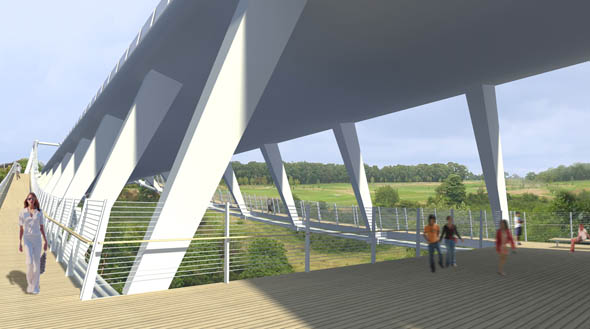 This two stage competition for the design of a new bridge to cross the Liffey Valley needed to address a number of issues particular to the project. Competitors were asked to consider the opportunity presented by the Liffey Valley setting to offer unique views of the area to both those on the Metro and those on foot/cycle. Throughout the competition submissions were made that:

* proposed designs that took traditional and recognisable bridge characteristics but enhanced them to meet the specific requirements of the brief
* proposed solutions that were particularly sensitive to the rural-type environment in the valley floor, including the river and its wider surroundings
* demonstrated potential to become iconic structures in their own right and were likely to add to the overall amenity of the area.

Adam Allegri, bridge engineer at Buro Happold, said: “Buro Happold collaborated with Explorations Architecture to develop the concept of a bridge, driven by a desire to minimise the visual impact of the bridge across the Liffey Valley. With the bridge sited in a naturally delicate and sensitive area, the design team developed an innovative, low-rise slender suspended bridge which is subtle yet expressive. The optimum combination of structural efficiency and visual subtlety has been achieved by allowing the suspension cable to cross the deck in elevation and provide support from below. As the cable crosses the deck users will be able to walk safely down an extraordinary promenade that follows the cable profile of the bridge. The team has delivered a winning design that will be the first significant suspension bridge in Ireland and a pioneering development in medium-span railroad suspension bridges.”

The jury had selected five entries from 24 to go forward to Stage Two of the competition. At Stage Two the assessors were most impressed with the high quality of those five submissions. In the main the candidates sought to address the concerns and issues raised by the assessment team in the initial stages and the five shortlisted designs presented the jury with a challenging but rewarding task in considering their relative merits. In the final analysis the assessors came to the unanimous view that the design proposed by Buro Happold Consultants Ltd./Explorations Architecture was to be the winning entry.

This entrant was deemed by the assessors as having best responded to the objectives of the brief. The design tailors a recognisable bridge design to best suit the local conditions using an innovative yet proven structural concept. The design is considered wholly in keeping with the receiving environment and addresses fully the requirement to minimise impact on the Liffey Valley whilst simultaneously offering users the opportunity to experience the setting. The assessors consider this solution iconic yet understated and look forward to experiencing its vista from a crossing Metro service.