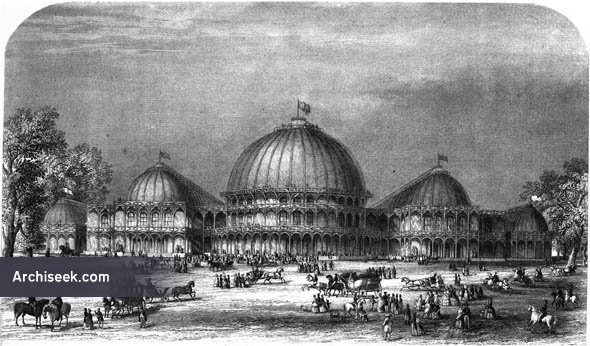 The Great Industrial Exhibition in 1853 was the largest international event to be held in Ireland. It lasted from the 12th of May to the 31st of October, and was entirely funded by William Dargan, and was held in Merrion Square in Dublin. The structure was constructed by Richard Turner.

The building is described by The Illustrated Dublin Exhibition Catalogue, which says: “Presenting a front to Merrion-square of 300 feet, the main or centre feature of elevation consists of a semicircular projection, which forms the Eastern termination of the Central Hall. This in a noble apartment of 425 feet in length, and 100 feet in height, covered by a semicircular roof trellis robs, in one span of 100 feet. On each side of the Centre upon trellis ribs, in one span of 100 feet. On each side of the Centre Hall, and running parallel to it for the same length, are two halls 50 feet wide, with domed roofs, similar to that which covers the main nave or hall of the building. The Height from the floor to the roof of each of these halls is 65 feet. They are approached through passages from the Centre Hall. In addition to these three halls are four compartments of 25 feet wide, running the whole length of the building; two are placed between the Centre Hall and the side halls, and two on each side of the latter; divided into sections of 25 feet square, forming convenient divisions for the purposes of classification. Over these compartments are spacious galleries, also running the length of the building, which not only afford increased space for exhibition, but form an agreeable promenade from whence the effect of the three halls may be seen to greater advantage. To the south of the Central Hall, left of the spectator, is a hall devoted to foreign contributions; adjacent to which is the Fine Arts Court, corresponding in position to the Machinery Court. The northern and southern courts have galleries running round them, from which the spectator also looks into the Central Court. The ceiling of the halls being divided into panels formed by the trellis ribs, and the other constructive parts of the building, has allowed ample opportunity for effective decoration. Light is admitted from above in one unbroken and equally distributed body. The construction of the building is strongly marked on the elevation, and forms in fact the ornamental character of the design. There are also external galleries which are attractive features. The materials of the building are iron, timber, and glass.”

On May 12, 1853, when the exhibition opened, the architect, John Benson, was granted knighthood.