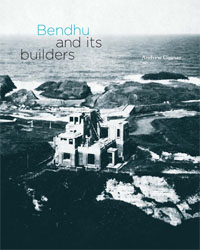 On 10th November, the Ulster Architectural Heritage Society (UAHS) launched its new publication, ‘Bendhu and its Builders’ by Andrew Cowser at the Meter House, The Gasworks in Belfast. Speaking at the launch acclaimed architectural critic, Shane O’Toole, likened the story of this fascinating building, that has become a legend on Ulster’s north Antrim coast, to a fairytale in three acts with some darker moments – as the name suggests “Bendoo” [or dark place] after the basalt cliff face that encloses the nearby sandy cove.

Standing sentinel over Ballintoy harbour on Northern Ireland’s Causeway coast the unique, some say eccentric, building of Bendhu is hard to miss. Andrew Cowser’s lively text tells the story of the building and provides an insight into the life and artistic output of its remarkable creator, Cornish artist Newton Penprase (1888-1978).

Karen Latimer, of the UAHS Publications Committee commented that , “This book underlines UAHS interest in architecture of all periods. Modern Listed buildings such as Bendhu are of particular interest as they are often at risk of alteration. We’re delighted to have Shane O’Toole, Architect and Critic launch our new publication.”

Penprase, a hugely popular and highly regarded Belfast Art College lecturer regularly caught the Friday night bus to Ballycastle, carrying materials; a bag of cement or other requirements for the weekend’s construction work, to the astonishment and, probable discomfort of his fellow passengers! He was to work on the house all his life and it remains a work in progress to this day.

Bendhu was completed and extended by two subsequent owners, Richard Mac Cullagh and Michael and Lorna Ferguson. Today completely refurbished in sympathy with Penprase’s original design, it is painted a brilliant white. This gives it a closer affinity to modern houses of the mid-1930s, the era when construction began. However, as Cowser explains, despite influences from Art Deco houses of the era – Bendhu is a one off.

Andrew Cowser is a graduate of the University of Edinburgh, and practised architecture in London for fifteen years. He returned to Belfast in 1993 to take up a lectureship at Queen’s University. Since 2004 he has been involved in research and writing, and is a regular contributor to architectural publication in the north of Ireland.

The book is available to purchase, priced £18 from the UAHS, 66 Donegall pass, Belfast or telephone 028 9055 0213. See the website www.uahs.org.uk for further information.