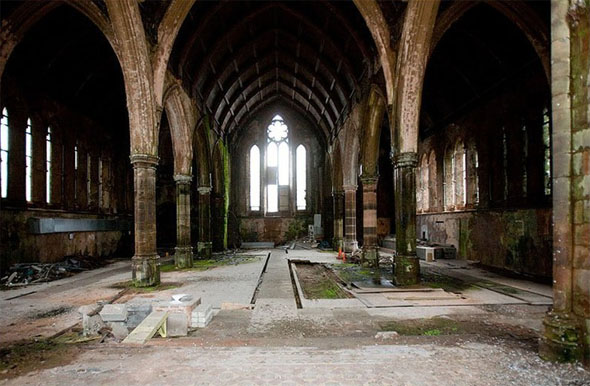 Decaying angels loom from lintels. There is an eerie silence about Carlisle Memorial Methodist Church, whose aged pillars and vaults have been colonised by vegetation. One stretch of wall is covered in hart’s tongue ferns, while green algae is gradually spreading up the pillars into the dark recesses. Over the last 20 years the decay has taken a firm grip on the Belfast church, with rotten timber piled at the entrance to the nave and the floor reduced in parts to skeletal remnants.

Just two stained glass windows remain intact “” one the glorious rose window in the nave and the other a small one in the lobby revealing how the building was commissioned by James Carlisle in memory of his son who died in infancy. This week the New York-based World Monuments Fund announced that the church would be included on its 2010 World Monuments Watch.

The church is only the third Northern Ireland building to be included on this international list of sites and monuments at greatest risk, with Mussenden Temple, now cared for by the National Trust, and Richhill House in Co Armagh, which is the focus of conservation efforts. Fionnuala Jay-O’Boyle, founder of the Belfast Buildings Preservation Trust, said it had become “unlovely and unloved”, and warned neglect can do as much harm as a developer.