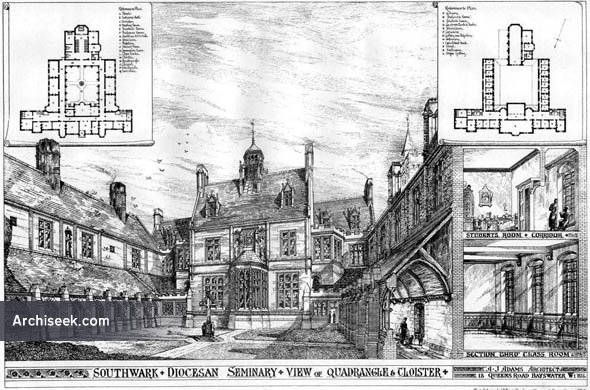 Alfred J Adams was born c.1838 and is recorded as being Scottish, but nothing is yet known of his early years. He may have been an assistant of John James Stevenson and Edward Robert Robson when first in London, as in January 1875 he was appointed “˜temporary additional draughtsman’ to the London School Board, and in 1876 he succeeded Robson as Stevenson’s partner. He was still in partnership with Stevenson in September 1878 when they designed 1 and 2 Lowther Gardens in London, but shortly thereafter Adams set up on his own, continuing to provide Stevenson with perspectives until at least 1880. While with Stevenson, Adams had undertaken designs for the nave of Our Lady of Mount Carmel RC Church, Battersea Park Road in 1877-78 in his name only and competing for Brompton Oratory and the Southwark Diocesan Seminary in 1878. At Brompton Waterhouse included him in the final twelve, and at Southwark he came second. In the Southwark diocesan archives he was described as “˜a clever Scotch convert architect’ introduced to the Battersea priest by Father McGrath. The 1881 census confirms that he was Scottish and gives his wife as Marie F Adams from Ireland. In the household at the time was Adams’s cousin Malcolm P Leitch, a 21 year-old civil engineer from the Cape of Good Hope.

Adams designed houses on the Cadogan estate and elsewhere in the mid-1880s and is probably the otherwise unidentifiable John Adams who designed sculptured studies in Vincent Square for Whithead & Sons (see Builder 11 October 1884). He was still alive in 1899 when he and Robson submitted a joint entry in the competition for the Cartwright Hall in Bradford.