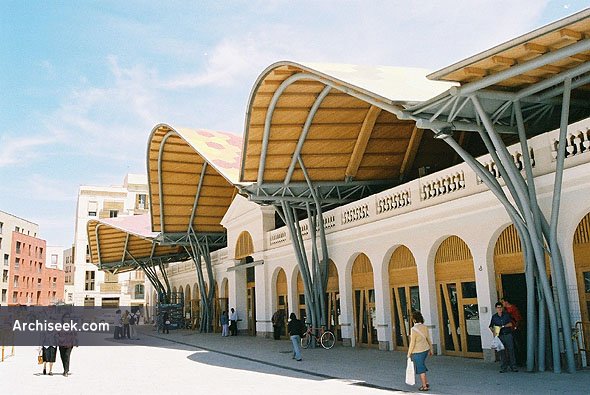 Birds have the best view – the 5,500 square metre roof is stunning from above. Inside, the ceiling’s abundant laminated wood arches upwards, reminiscent of upturned boats. An unusual, massive steel beam dissects the building. Project director Igor Peraza said it was from this that most of the lower infrastructure hung. Luckily, it has afforded much versatility, accommodating many changes to the plans.

Renovation began in 1998. Work halted for two years upon the discovery of the foundations of a major medieval monastery and some ruins of a late-Roman necropolis on the site, sparking controversy over if and how they should be preserved. Construction of the Dominican monastery and a church, said to have been the first of the Gothic style built in Barcelona, is believed to have started in about 1241. The monastery, a centre of culture and art, is thought to have contained a 20,000-volume library. The friars, who included Saint Raymond of Penafort, also dispensed medicines. When Barcelona erupted in riots in 1835, the monastery was one of several torched by revolutionaries. Amid protest, the remains were demolished in about 1837. Construction of the market of Isabel II – soon popularly known as that of Santa Caterina – started in 1844. The market opened in 1848. Some of the monastery foundations have been preserved for public display.

The 12,000-square-metre, three-level project was complex – it included retention of three of the market’s facades and, below the market, a loading/unloading area for trucks, 250 additional car parks and, 11 metres down, an organic waste depository for the Santa Caterina and La Ribera areas. Adjacent to the market two new buildings are being constructed providing 59 public housing flats – eagerly awaited by the senior citizens who won a lottery to live there.

Tagliabue has admitted that people would see similarities between the market redesign and the Scottish Parliament building in Edinburgh. “A series of buildings that one architect designs is like children from the same family. To the parents they are all different but to outsiders there are lots of similarities. I don’t see any direct similarities between the Scottish Parliament and the Caterina Market in Barcelona, but they do have in common the aim to break boundaries. Both buildings are trying to influence their surroundings which are both old parts of cities. They are both more than buildings, but a piece of the city. It is natural that there will be similarities, as architects are not infinite.”