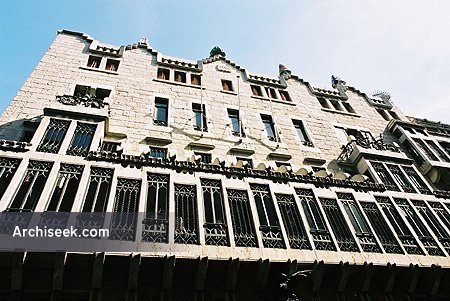 Palau Güell, or Guell Palace, was the first of many commissions that Antoni Gaudí received from Eusebi Güell i Bacigalupi (1846-1918) a leading industrialist who later became the Count of Güell. It is located in what was at the time one of the least desirable areas of Barcelona and built next to the house of the client’s father.

This stone and iron building is fronted with two parabolic arched gates, large enough for horse-drawn carriages to enter and then access, via ramps, the stables in the basement. The ground floor is unclad brick, an uncoventional finish for the time as it was believed that brick was ignoble material. The basement stable area is a fabulous space with brick vaulting and walls. It has two spiral ramps, one for horses and the other for servants. From the first floor, a grand staircase leads to the main floor of the house.

Güell owned marble works so many surfaces in the main reception rooms had marble walls, floors or ceilings. The interior is dominated by the central salon topped with a parabolic dome which stretches the height of the building and lets in light via parabollic-shaped windows set into a cone in the roof. The first floor windows which light the primary circulation spaces and reception rooms for entertaining project over the pavement.

Like at Casa Batlló and Casa Milà , Gaudi spent a lot of time and effort designing the rooftop of the building. Here he produced 20 different mosaic-covered sculptures which turn the chimneys, ventilation covers, and stairwells into works of art. It is a UNESCO World Heritage Site.