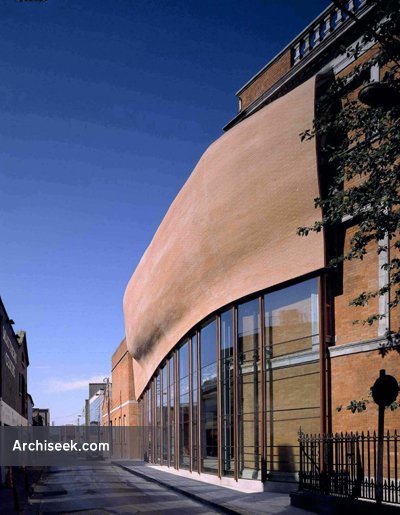 The Crawford Art Gallery occupies a prominent position in the heart of the City of Cork and prior to the new extension was a clever amalgamation of two separate structures dating from the eighteenth and nineteenth centuries. The oldest part of the building is the Custom House of 1724, possibly the work of a Dutch architect, and as such one of the few relics of the close mercantile contacts between Cork, Amsterdam and North America in the eighteenth Century.

In 1884, – the maritime facilities in the city having moved down river – the Custom House was extended with Galleries and rooms to form the Crawford School of Art. The School of Art having moved to another site, the Building became the Crawford Municipal Art Gallery, and in 1996 a competition was held for the design of a new extension extending the pattern of adding to the site every one hundred years.

The compact nature of the site bounded on three sides by busy streets meant that the formal elevations were in stark contrast to the rear elevations, (not seen from the street), which was a bizarre accumulation of various forms in a dark triangular courtyard.

Both the existing buildings were constructed of brick, a material not indigenous to the city, and further evidence of the early Dutch influence. In fact when the building was extended in 1884, the face of the old building of 1724 was completely replaced with new bricks to match those of the extension. Since Brick is so strongly characteristic of the site, it was an obvious choice for the new extension, and ways were explored of using it in an innovative and contemporary fashion.

The floating curved planes of the new façade are therefore made out of bricks glued together to form monolithic shells, to articulate the contrast between the old and the new. The upper gallery’s dramatically shaped roofs create an architectural space with natural daylight from the roof – the lower gallery is more restrained with a glass wall facing Half Moon Street and a tapering ceiling allowing some light deep into the plan.