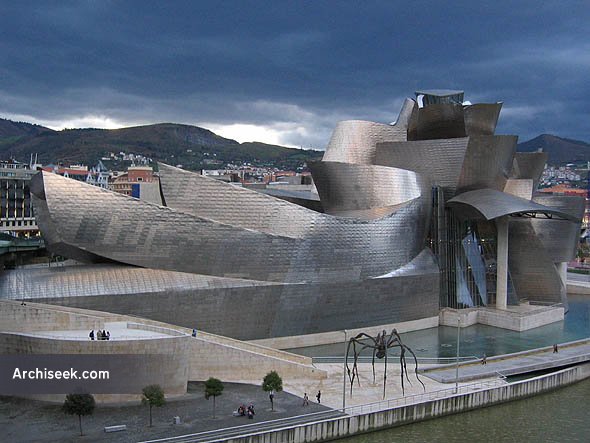 Guggenheim Museum Bilbao, designed by Canadian architect Frank Gehry and opened to the public in 1997, was immediately vaulted to prominence as one of the world’s most spectacular buildings in the style of Deconstructivism. The Guggenheim Museum Bilbao work is perceived to be Gehry’s most iconic and representative work, and was a culmination of Gehry’s new directions and experimentation with surfaces and shapes. The museum’s design and construction serve as an object lesson in Frank Gehry’s style and method. Like much of Gehry’s other work, the structure consists of radically sculpted, organic contours. Sited as it is in a port town, it is intended to resemble a ship.

Its brilliantly reflective panels resemble fish scales, echoing the other organic life (and, in particular, fish-like) forms that recur commonly in Gehry’s designs, as well as the river Nervión upon which the museum sits. Also in typical Gehry fashion, the building is uniquely a product of the period’s technology as computer simulations of the building’s structure made it feasible to build shapes that architects of earlier eras would have found nearly impossible to construct.

Also important is that while the museum is a spectacular monument from the river, on street level it is quite modest and does not overwhelm its traditional surroundings. The museum was opened as part of a revitalization effort for the city of Bilbao and for the Basque Country. Almost immediately after its opening, the Guggenheim Bilbao became a popular tourist attraction, drawing visitors from around the globe. A product of collaboration between the Basque government and the Solomon R. Guggenheim Foundation, the museum is a catalyst for development in the former warehouse district. The public plaza at the entrance allows, and encourages, pedestrian flow between the Guggenheim, a nearby art museum and the historic district. It was widely credited with “putting Bilbao on the map” and subsequently inspired other urban regenerations – this has become known as the Bilbao Effect.

The building was constructed on time and budget, which is rare for architecture of this type. In an interview in Harvard Design Magazine Gehry explained how he did it. First, he ensured that what he calls the “organization of the artist” prevailed during construction, in order to prevent political and business interests from interfering with the design. Second, he made sure he had a detailed and realistic cost estimate before proceeding. Third, he used CATIA and close collaboration with the individual building trades to control