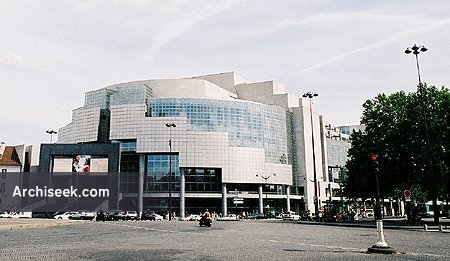 The result of a gigantic international competition, this building is one of the more maligned of the Grands Projets (Mitterrand’s 15 billion franc program to provide a series of modern monuments to symbolize France’s central role in art, politics, and world economy at the end of the twentieth century). Though not nearly as controversial as Pei’s pyramid at the Louvre, or as flashy as La Défense, it is the design’s deliberate anonymity that leaves this building wanting. A bulky composition of gridded glass and stone, the building is very reminiscent of late 1980s office buildings. The auditorium is very large (2,700 seats) and its aim is to bring opera to the masses. The building also containsa library and other performance spaces.