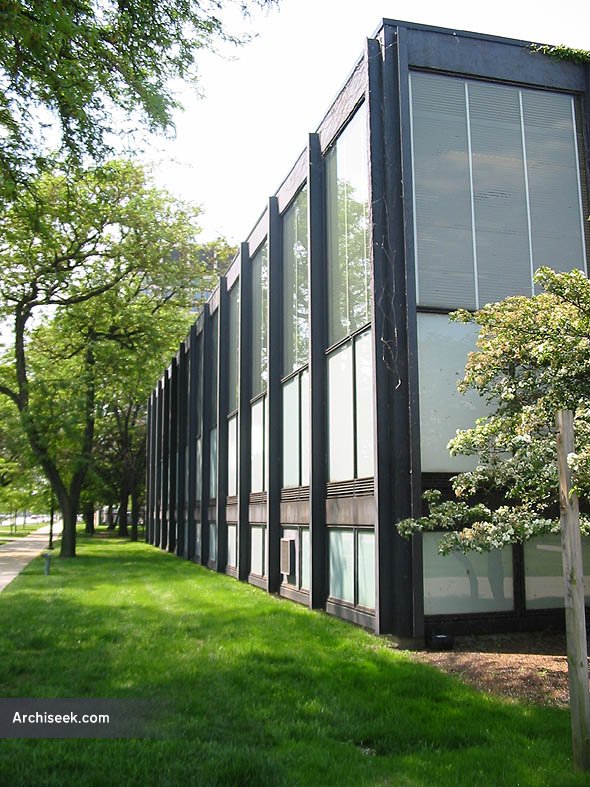 Widely regarded as one of the most architecturally significant buildings of the 20th Century, Crown Hall was completed in 1956 during Mies van der Rohe’s tenure as director of IIT’s Department of Architecture. Designed to house Illinois Institute of Technology’s departments of architecture, planning, and design, the building’s dramatic, structurally-expressive form resulted from the need to create an open interior space that could be flexibly adapted for changing needs and uses. Crown Hall incorporates a clear span of 220 by 120 feet accomplished by steel plate girders situated above the roof. The building is famous for its clear structural expression, the varying qualities of transparency in its ultra-thin steel and glass facade, and the open, free flowing interior of the “universal space.”

Upon its opening, Mies van der Rohe declared it “the clearest structure we have done, the best to express our philosophy,” and recent critics have gone so far as to call it the Parthenon of the 20th Century. It was named for S. R. Crown, a co-founder of the Material Service Corporation.

“One of Mies van der Rohe’s last building erected on the Illinois Institute of Technology campus is Crown Hall, a superb example of his clear span designs. The roof is suspended from the underside of four steel plate girders which in turn are carried by eight exterior steel columns. These columns are spaced 60 feet apart with the roof cantilevered 20 feet at each end….Crown Hall, in which architecture, city planning, and design are taught, has a symmetrical plan about its short axis. Free-standing partitions at the height of the window muntins partially subdivide the space. Only two enclosed service ducts interrupt the ceiling. A pair of interior stairways leads to a basement level used for workshops, offices, toilet rooms, and mechanical equipment. …Natural ventilation is provided by louvers at floor level. A. James Speyer. Mies van der Rohe. p73.