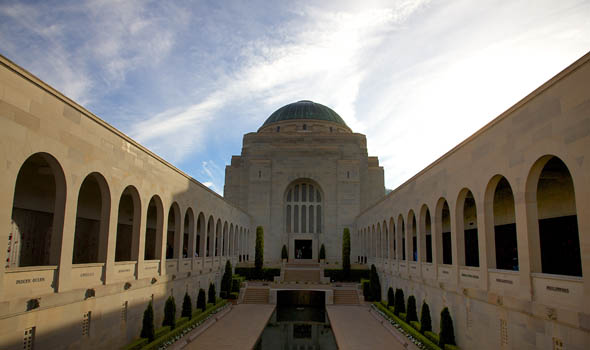 A competition for the design of the memorial was conducted in 1925-26, however none of the entries received met all of the competition conditions and no winner was announced. Two of the competitors, Emil Sodersteen and John Crust were subsequently asked to develop a new collaborative design incorporating the architectural style of Sodersteen and the innovative and cost cutting approach of Crust. The new joint Sodersteen and Crust design was presented in 1927. The architectural style of the design was primarily Sodersteen`s work and drew upon the recent development of the Art Deco style. The form of the building was strongly influenced by Crust`s intention to incorporate a commemorative courtyard for the Roll of Honour.

Construction, which began in 1928-29 was curtailed and then postponed by the onset of the Depression. In 1934 work started again in a limited way. The building`s design was subject to many changes throughout its fourteen years of construction and major details were not resolved until 1938. Parts of the building were occupied by memorial staff and collections as early as 1935, although the main building structure was not completed until 1941.