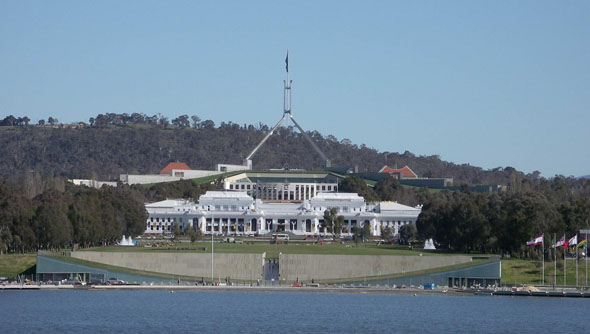 In 1978 the government decided to proceed with a new building on Capital Hill, and the Parliament House Construction Authority was created. A two-stage competition was announced, for which the Authority consulted the Royal Australian Institute of Architects and, together with the National Capital Development Commission, made available to competitors a brief and competition documents. The competition drew 329 entries from 28 countries. Five were invited to advance to the second stage to present more detailed plans and building models.

The competition winner was the US-based Italian architect Romaldo Giurgola, with a design which involved burying most of the building under Capital Hill, and capping the edifice with an enormous spire topped by a large Australian flag. From above, the design of the site is in the shape of two boomerangs enclosed within a circle.

Construction began in 1981, and the House was intended to be ready by Australia Day, 26 January 1988, the 200th anniversary of European settlement in Australia. It was expected to cost A$220 million. Neither the deadline nor the budget were met The building was finally opened by Queen Elizabeth II on 9 May 1988.