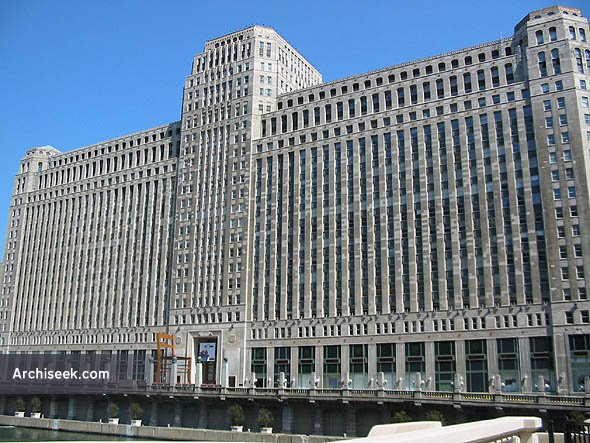 When opened in 1930, the Merchandise Mart or the Mart, was the largest building in the world with 4,000,000 square feet (372,000 m2) of floor space. Previously owned by the Marshall Field family, the Mart centralized Chicago’s wholesale goods business by consolidating vendors and trade under a single roof. Massive in its construction, and serving as a monument to early 20th century merchandising and architecture, the art deco landmark anchors the daytime skyline at the junction of the Chicago River branches. With upper levels bathed in colored floodlight, the structure stands out against darker downtown buildings in night views. The building continues to be a leading retailing and wholesale destination, hosting 20,000 visitors and tenants per day.

The Merchandise Mart was designed by the Chicago architectural firm of Graham, Anderson, Probst and White to be a “city within a city”. Second only to Holabird & Root in Chicago art deco architecture, the firm had a long-standing relationship with the Field family. Started in 1928, completed in 1931, and built in the same art deco style as the Chicago Board of Trade Building, its cost was reported as both $32 million and $38 million. The building was the largest in the world in terms of floorspace, but was surpassed by The Pentagon in 1943, and now stands twenty-fifth on the list of largest buildings in the world.

Designer Alfred Shaw integrated art deco stylings with influences from three building types – the warehouse, the department store and the skyscraper. A warehouse block stands as the 18-story bulk of the building. Ribbon piers define the windows, and the building’s chamfered corners, minimal setbacks, and corner pavilions disguise the edges of the mass and visually reduce bulk. The south corner pavilions are of greater height than the north corner pavilions. The building is open at the pedestrian level with bronzed framed display windows, typical of a department store, on the south, west and east boundaries. The 25-story central tower ascends with a peak in the form of a skyscraper, and rests in the southern half of the building. Deeply recessed portals occur between raised panels, and are adorned with medallions featuring the interlocked initials of the Merchandise Mart. The same logo occurs throughout the building. Fifty six American Indian chiefs circled the tower’s crown, a reference to the site’s history and Chicago’s early trade activities. Three and a half feet wide by seven feet tall, the terra cotta figures were barely visible from the street, meant to be viewed from the upper floors of the skyscrapers planned to rise along the riverbank.