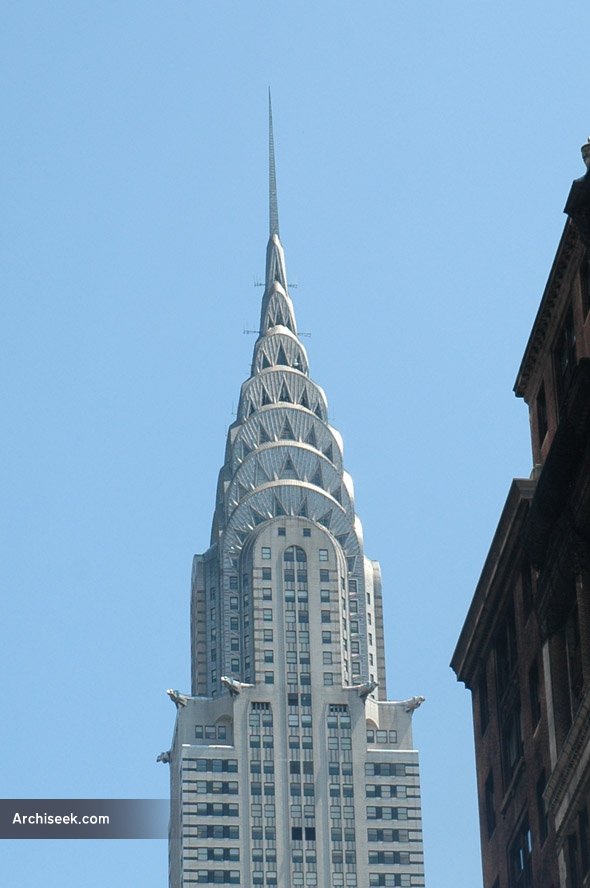 A distinctive symbol of New York City, originally built for the Chrysler Corporation, this was the first structure in the world to surpass the 1,000 foot mark. At the time the building was erected, the builders of New York were in the throes of a stiff competition to build the world’s tallest skyscraper. The Chrysler building was constructed at an average rate of 4 floors per week, and no workers were killed during construction. Just prior to completion, the building stood even with H. Craig Severance’s 40 Wall Street. Severance subsequently added two feet to his building, and claimed the title of the world’s tallest building. Severance and Van Alen had previously been business partners before a bitter falling out.

Not one to be outdone, the architect William Van Alen had already secretly obtained permission to build a 185 foot spire, which was constructed inside the building. The spire, composed of stainless steel, was hoisted to the top of the building on October 23, 1929, making the Chrysler Building the world’s tallest building.

The Chrysler Building is a famous example of Art Deco architecture, and the distinctive ornamentation of the tower is based on features that were then being used on Chrysler automobiles. The corners of the 61st floors are graced with eagles, replicas of the 1929 Chrysler hood ornaments. On the 31st floors the corner ornamentation are replicas of the 1929 Chrysler radiator caps. The building is constructed of masonry, with a steel frame, and metal cladding. It was overtaken by the Empire State Building as the tallest building in the world in 1931.