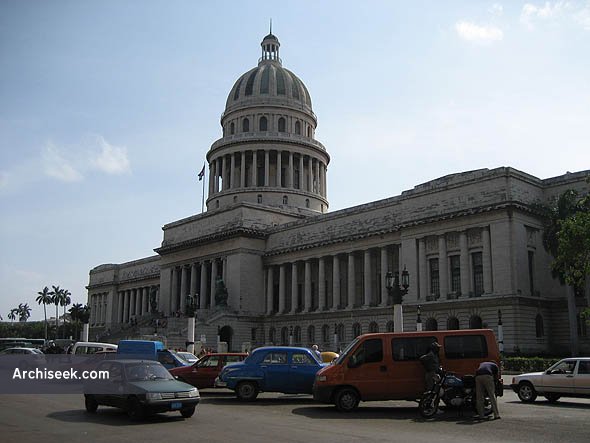 El Capitolio, or the National Capitol Building in Havana, Cuba, was the seat of government in Cuba until after the Cuban Revolution in 1959, and is now home to the Cuban Academy of Sciences. In 1925, the dictator Gerardo Machado took power and commissioned a design from the architects Raúl Otero and Eugenio Raynieri. Overseen by the U.S. firm of Purdy and Henderson, 8,000 labourers worked 8-hour shifts 24 hours a day, and as a result the building was completed in just 3 years and 50 days. The neoclassical building is strongly reminiscent of the U.S. Capitol, but Raynieri claimed to take his inspiration for the cupola from the Panthéon in Paris.

The legislature did not move into the building until February 1931, and although the structure was complete by 1929 it took almost another two years before the interior decoration was finished. The building is finished with fine marble throughout and the total cost of construction and decoration is estimated to have been 17 million pesos. The building served as the seat of the legislature until the late 1950s; both the House of Representatives and Senate were based in the building.