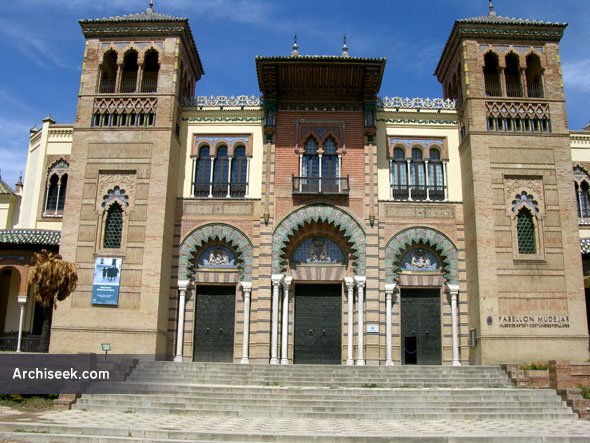 The Mudejar Pavilion was built by the architect Aníbal González as part of an extensive urban development project for the 1929 Ibero-American Exhibition. The pavilion, which functioned as the Palace of Decorative Arts for the exposition, is located in the Plaza de América, part of the arrangement of exhibition buildings set within the gardens of the Maria Luisa Park. Glazed tile fountains, benches, and architecture within the Park refer, often whimsically, to Spain’s Islamic past. The term Mudejar refers to Muslims who lived under Christian rule after the Christian conquests, and has been used to describe a wide variety of Islamicizing architecture produced on the Iberian Peninsula and the New World.

The pavilion’s exterior is articulated in brick and stucco. The central block of the front façade is composed of a triple-arched entry portal flanked by towers with open arcades, and curving arcaded wings frame the central block. González intended the architectural style of the pavilion, known as Neo-Mudejar, to evoke local architectural traditions by utilising common elements of Mudejar architecture such as the use of brick for both construction and decoration, and the incorporation of glazed tiles and interlacing polylobed and horseshoe arches as principal elements of the decorative programme.