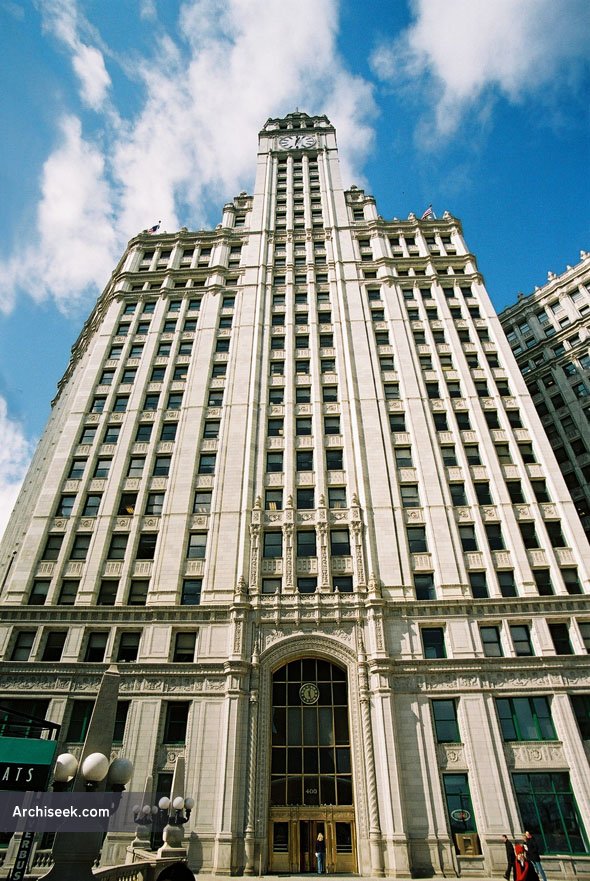 William Wrigley, Jr., the successful chewing gum manufacturer, in search of an impressive main office for his company, picked the present location of the Wrigley Building in 1920. The building was completed in 1924 and consists of two sections connected by an open walkways between the 3rd and 14th floors. The north tower consists of 21 stories and the south tower stands 30 stories high measuring 425 feet. The night flood lights were originally turned on in 1921. The illumination consists of some 116, 1,000-watt metal halide lamps installed on the south side of the Chicago River, seven street-level lamps and 16 halide lamps to the west of the building. The graduating illumination of the building towards the top is achieved by the 62 lights which are mounted on the building itself.

The Wrigley Plaza which is now situated between the two towers was originally designed by the Wrigley Building’s architects, but was not built until 1957 by Louis Solomon and John Cordwell. The giant two-story clock has four -nineteen and a half feet in diameter clock dials. Each of the dials have an hour hand measuring 6.5 feet and a minute hand equalling 9 feet 2 inches long. The exterior of the structure is a special glazed tile of terra cotta, which gives it a creamy white color. It is clad in approximately 250,000 individual glazed terra cotta tiles, the most extensive use of terra cotta in the world during the time of construction.

The architectural shape of the Wrigley Building is patterned after the Seville Cathedral’s Giralda Tower in Spain. However, the ornamental design of the building is based on an American adaptation of French Renaissance style. Charles Beersman, chief designer for the building’s architects, used his talent and imagination to combine the two concepts.