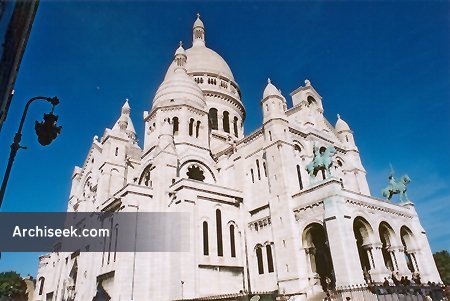 Probably the best site for a building in Paris, the Basilique du Sacré-Coeur can be seen from most parts of the city because of its height and gleaming white stonework. Approached up a long flight of steps immortalised in many films, the church has a magnificent view, especially from the top of the cupola. The Basilique du Sacré-Coeur was built as a monument to the glory of France and the Sacred Heart and was funded by sponsorship. The names of the sponsors are carved into the stonework. The two statues flanking the entrance are Joan of Arc and St. Louis.

It is possible to see many of the architectural details at close quarters by taking the stairs to the top of the cupola crossing the rooftop and around the smaller towers. A warning for the visitor, the stairs are very steep and narrow.

The interior of the church is quite dark and is in use by a nearby convent during the day. The underground crypt is much more interesting with its immense scale, exposed stonework, and vaulting.