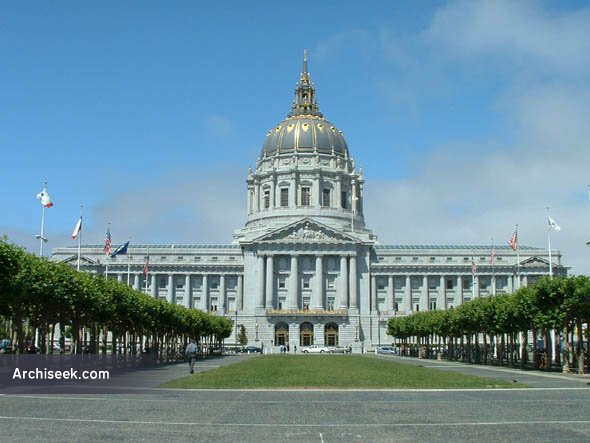 Built of gray California granite with blue and gold burnished ironwork, San Francisco City Hall was designed in a French Renaissance style. In plan it measures 408 by 285 feet, enclosing a square rotunda covered by the 112 foot diameter dome. The top of the dome is 11 feet 7 inches taller than the United States Capitol in Washington and is based on that at Les Invalides in Paris.

The present building is actually a replacement for an earlier City Hall that was completely destroyed during the 1906 Earthquake. The architect was Arthur Brown Jr whose attention to the finishing details extended to the doorknobs and the typeface to be used in signage. Brown also designed San Francisco’s War Memorial Opera House, Veterans Building, Temple Emanuel, Coit Tower and the Federal office building at 50 United Nations Plaza.