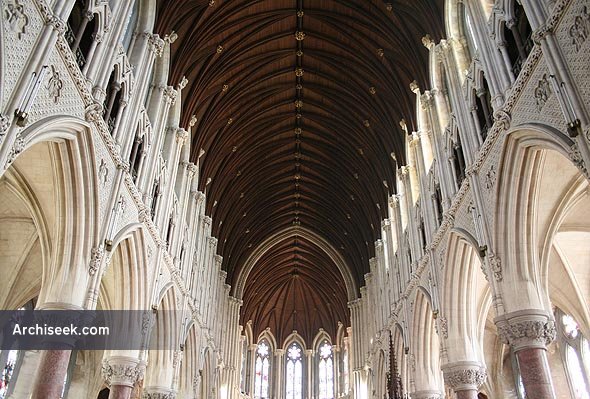 Designed by Edward W. Pugin and George Ashlin, this magnificent cathedral, which dominates Cork Harbour from land and sea, took 47 years to build, and was completed in 1915.

Edward Welby Pugin was the eldest son of Augustus W.N. Pugin, a famous architect & designer of Gothic architecture. After his father’s death in 1852 Edward Pugin took over his father’s successful architecture practice. At the time of his own early death in 1875, Pugin had designed and completed more than 100 Roman Catholic churches. He designed churches and Cathedrals primarily in the U.K and Ireland.

“IN our number for October 15th, 1868, we gave an account of the laying of the first stone of this important church. We find the following particulars in acircular issued by the bishop of the diocese, from which it will be seen that the contract for the erection of the cathedral has been given to Mr. Michael Meade, Great Brunswick-street.

It appears that steps were taken to collect funds as far back as ten years ago, and up to September last the sum of £15,000 had been collected. The circular then goes on to state what has been done :The site of the old chapel was to be the site of the new cathedral. A more beautiful or a more convenient site could not, after the closest inquiry, be found. It is nearly central from west to east, and from north to south; and it is so elevated that the church will he visible from every part of the harbour. It had two disadvantages. It was too short, and at one end it was too narrow. With all the ground that could be taken from the yard and presbytery, there could be space for a building only about 140 feet long by between 70 and 80 feet broad. To add to the length, two houses on the terrace next to, and on a line with, the presbytery were purchased and taken down; to widen the front to the required breadth, the road was changed; and the ground thus gained is now enclosed within the foundation walls of the church, which can therefore have the more symmetrical proportions of fully 190 feet long in the clear, of over 70 feet broad for nave and aisles, and of nearly 110 feet in the transepts, with full room for the towel and spire at the front southern angle, and sufficient elevation throughout for the clerestory. Yet the site is so limited that during the erection of the new church, the old building could not be retained. It became unavoidably necessary to provide a temporary chapel for the parishioners; and that the outlay may not be lost, the house prepared for this purpose was so constructed that, on ceasing to be necessary as a chapel when the new church is opened, it can at a small expense be converted into Christian Brothers schools, which will be large enough for the accommodation of seven hundred pupils. 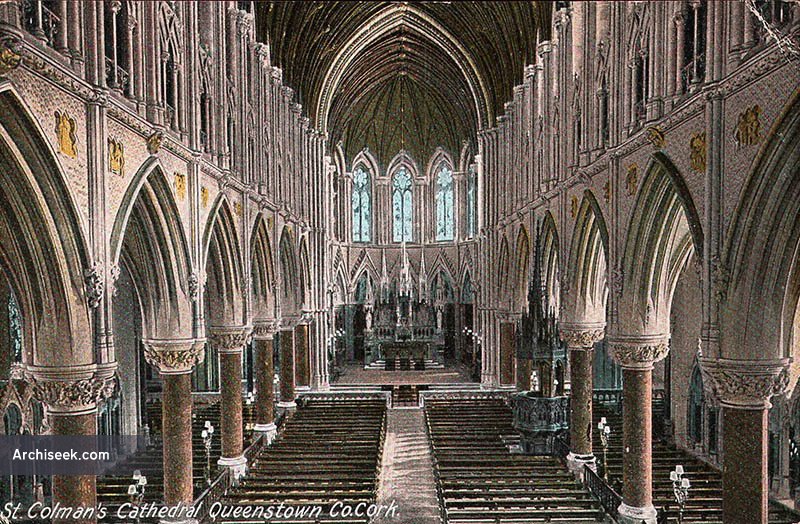 The widening of the road in front required a large expenditure, inasmuch as it could not be effected without a high, long, and thick wall of solid mason work. But the most costly undertaking as yet has been the foundation. The site is on a sloping rock, on the southern side of which it was necessary in some parts to sink 24 feet below the level of the future floor of the church, while in other parts a firm bottom was found at a depth of only 4 feet. The cost of these excavations and of heavy massive foundation walls to be raised all around to the uniform level of the cathedral floor, could be so little calculated on beforehand, that the church committee, guided by the best advice they could have, decided on doing this part of the work on their own responsibility, and on asking the competing contractors to start from this level in making their estimates. As we write these lines, the foundation walls all round are within a few inches of the intended level.

The outlay on the temporary chapel and its fittings, on the purchase of the terrace houses, on clearing away the old buildings, on widening the road, and on preparing the foundations, has taken more than half the £15,000 already mentioned. In a few weeks the committee will be prepared to invite the contractor to enter on the works.

The material used in the foundation walls has been of the very best kind. From the floor level to roof of aisles and nave, the walls throughout the whole building, with the exception of buttresses and window dressings, are to be faced, as recommended by the architects, with granite; and the interior is to be lined with Bath stone.