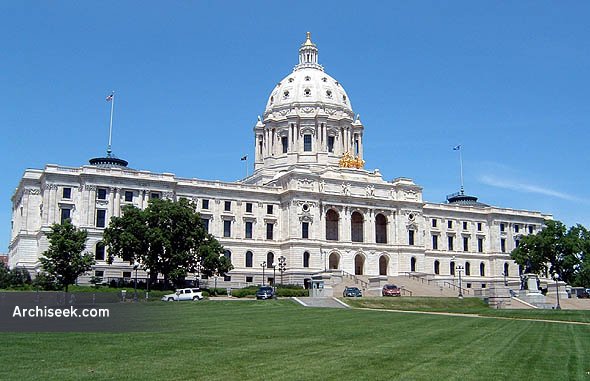 When the Minnesota Territory was organized in 1849, the legislature held its first meetings in a log hotel in St. Paul. Not until five years later was the first Capitol finished and ready to be occupied. In 1881, the building was destroyed by a fire that broke out during a session of the legislature. When a second Capitol was completed the next year, it was already too small for the growing state. In 1893, bills proposing a new statehouse were passed and a commission was appointed to undertake the project. In 1895, Cass Gilbert was selected as the architect after his design won a competition that included 40 other entries.

The vast domed structure was modeled after Saint Peter’s in Rome. Gilbert said that his plan was “in the Italian Renaissance style, in quiet, dignified character, expressing its purpose in its exterior appearance.” It opened to the public on Jan. 2, 1905.

Cass Gilbert was born in Zanesville, Ohio in 1859, and studied architecture at the Massachusetts Institure of Technology. In 1912, Gilbert designed the Woolworth Building in New York City. His other works include the state capitols of West Virginia and Arkansas, and the U.S. Treasury Building and the U.S. Supreme Court Building in Washington, D.C. Gilbert died in 1934.