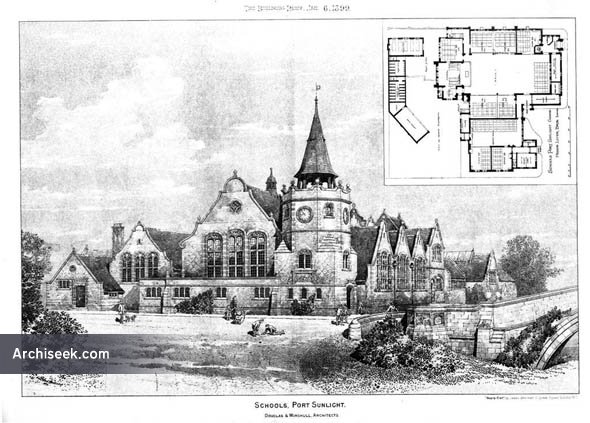 “These schools have been erected in a central position in the picturesque village which Messrs. Lever Bros., Limited, are building for the use of those engaged in connection with their extensive works. The bridge in the foreground spans a ravine, which, by retaining its natural slopes and fine trees, assists in realising the ensemble of an old English village. The school at present accommodates 500 boys, girls, and infants, but, owing to the growing needs of the play, the infants’ department is shortly to be enlarged. A separate room is provided for each class in the mixed school, so that the teaching may be as efficient as possible, while four of these rooms can bes readily thrown open to the main hall by sliding back the glazed screens, which were supplied by Messrs.Peace and Torquay. The large hall (including the four classrooms) is used for services on Sundays, a chancel with organ chamber and vestry under, being attached, but which can be screened off during the week. Facilities for teaching science, cookery, and wood- working are provided, and there are spacious playgrounds. The walls are of Riabon brick, with Helsby stone-dressings, and the roofs are covered with green slates. The woodwork is of oak — the floors being laid with wood blocks, except the entrances, lavatories and cloakrooms, which are tiled, and round which run glazed brick dadoes. The heating and ventilation’ was carried out by Messrs. John King, Limited, of Liverpool. The schools were built (without a contractor) by Messrs. Lever’s own workmen, and the care with which they were carried out is in a measure due to the able superintendence of Mr. R. Richson. Messrs. Douglas and Ford- ham (now Messrs. Douglas and Minshull), were the architects of both the schools and the bridge. “