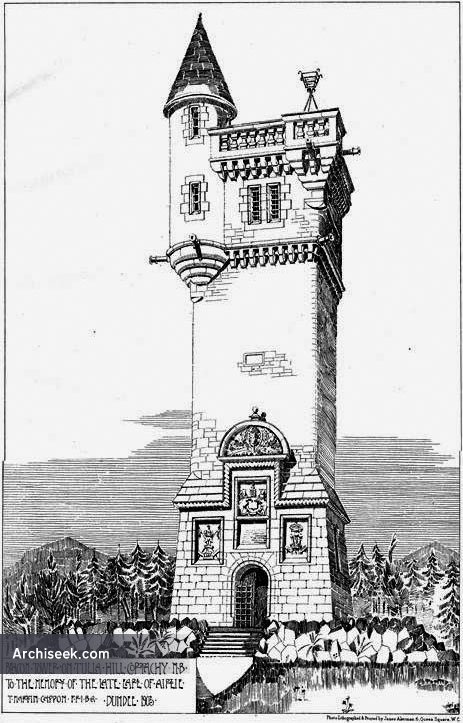 “The laying of the memorial stone took place on Saturday of the massive tower which has been in course of erection on Tulloch Hill, Cortachy for some months, to the memory of the Earl of Airlie, who fell mortally wounded while gallantly leading the charge of the 12th Lancers, at Diamond Hill, near Pretoria, in June of last year. From a design by Mr. T M Cappon, architect, Dundee, the tower is modelled on the lines of the old Border beacon or warning tower. It is Scottish Baronial in style, with something of the character of that of Airlie Castle, or of the more recent Red Lodge of Cortachy, and is intended to be used, with its single platform and beacon, on occasions of national or estate rejoicings. The foundation consists of a platform formed round the base of the monument with large boulders taken from the hill, while the base proper is set apart for telling the story of the life of the late Earl and his military service, In the base are placed carved panels representing the arms of the Airlie family, with inscriptions and the badges of the regiments in which the late nobleman served _ viz., the 12th Lancers, the 10th Hussars, the Bays, the Scots Guards, and the Hants Yeomanry. Rising to a height of 65ft. upon an eminence l,230ft. above sea level, and costing £1,300, the monument is visible not only throughout the whole valley of Strathmore, but from Perthshire, Fifeshire, and Kincardineshire as well.” Published in The Building News, September 11th 1903.