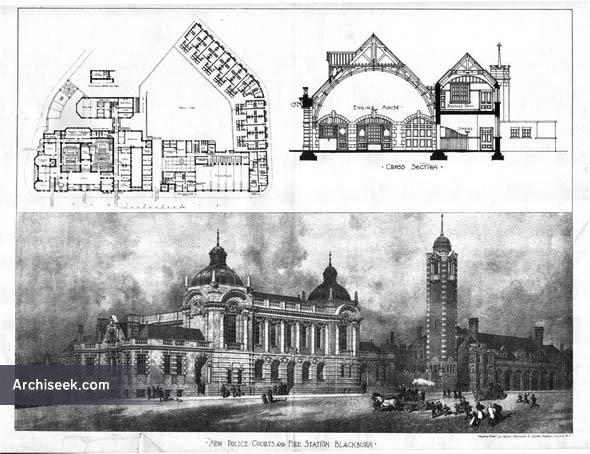 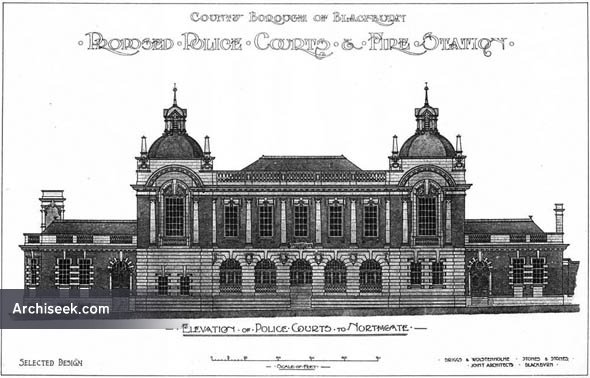 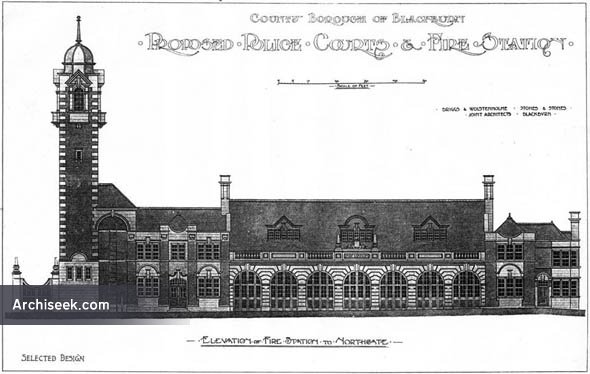 “The work is the conjoint production of Messrs. Briggs and Wolstenholme, of Liverpool and Blackburn, and Messrs. Stones and Stones, of Blackburn, and is the one placed first in the recent limited competition, in which two local, one Manchester, and three London firms were invited to submit schemes. We now
give the principal elevations of both buildings. The plan was published with our reproduction of the Royal Academy perspective, as above. The assessor was Mr. A.N. Bromley, F.R.I.B.A., of Nottingham, his report being unanimously adopted by the corporation. The view is taken from the comer of Northgate and Blakey Moor, the separate blocks presenting a characteristic appearance indicating their diverse use, while a pleasing unity is maintained by the group as a whole. One of the distinctive features in this plan is the separate building in the rear of the police-courts, in which are placed the parade room with mess-room, reading-room, recreation-room, Are., over, connected by a covered way on the lower ground floor with the charge office, and on the upper ground floor by a bridge across police yard, giving the chief constable direct communication from his department, and at the same time supervision of all going on in the police and drill yards, the chief constable being the superintendent of the fire brigade. The fire engine house is flanked by the deputy superintendent and chief officers’ houses, the stabling being in the rear and the whole of the workshops and stores conveniently grouped around the covered shed placed between the gateway for returning steamers and the engine-house. The firemen’s dwellings are to be in Duke-street, leaving a large open space for drill purposes in the centre of the site. The buildings are to be faced with Accrington bricks, with stone dressings, and covered with Welsh green slates, the cupolas being covered with copper. The estimated cost is a little over £40,000.”