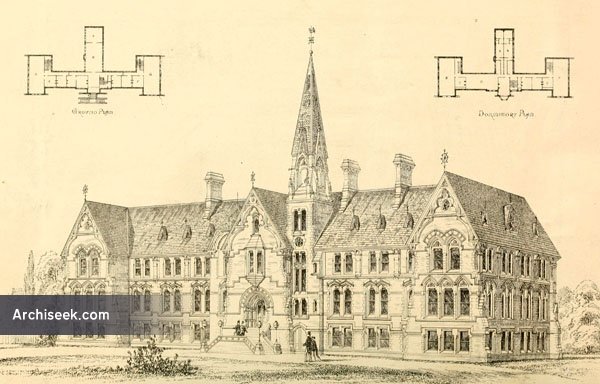 Formed as The Manchester Warehousemen and Clerks’ Orphan Schools in 1855, moved to this site in 1869, and now known as Cheadle Hulme School.

From The Building News: “ONE of our illustrations represents the Manchester Warehousemen and Clerks’ Orphan Schools now being erected in the suburbs of Manchester. It is constructed to accommodate about one hundred boys and girls, and is so arranged that it can easily be extended at a triffling cost The dormitory and school-rooms will be well ventilated and lofty. There will be kitchen, scullery, bakery, play-rooms, and other conveniences on the basement floor. The walls are constructed of bricks made on the spot, and are formed with a 2in. cavity in the centre of the wall, the inner and outer brickwork being well tied together with galvanized iron cramps. Darley Dale stone dressings are freely introduced, and the front entrance is approached by a handsome flight of stone steps. We believe the total cost will be under £10,000. Earl Granville laid the foundation stone a short time since . Mr. Ernest Bates, of London and Manchester, is the architect.”