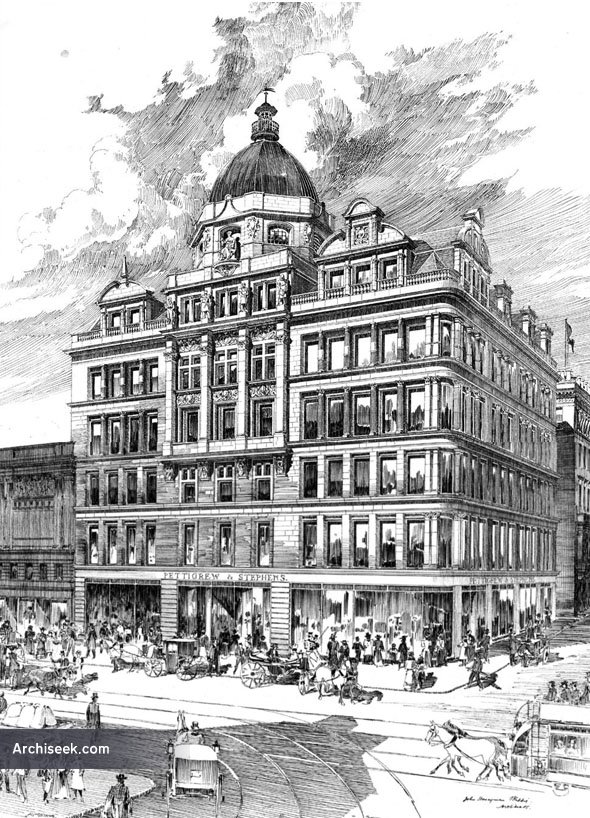 Pettigrew & Stephens was a leading Glasgow department store that was founded in 1888 as Pettigrew & Stephens, later part of House of Fraser. The store sold a wide range of goods, including clothes, millinery, confectionery, carpets, furniture, ironmongery and china. In 1914, it was massively extended becoming the largest department store in Scotland. In 1923, it was extended again, with the addition of a specialist men’s department. By 1955, the name was phased out.

“This building, which occupies a prominent position in Sauchiehall-stroet, one of the principal thoroughfares, incorporates an existing structure which, to a certain extent, dominates the design. The area is divided into three sections, separated by fire walls. The centre section, which is emphasised by the dome, contains the entrance and main staircase. The various floors are reached by an elevator in the well of staircase. The two eastern sections are lit by open wells having a glass roof above. The architects are Messrs. John Honeyman and Keppie, 10O Bith-street, Glasgow.” Published in The Building News, August 18 1899.