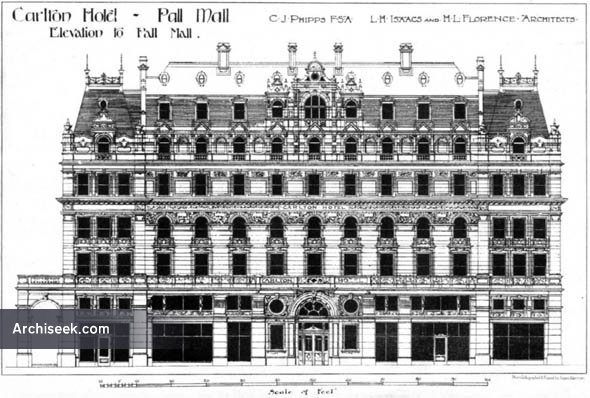 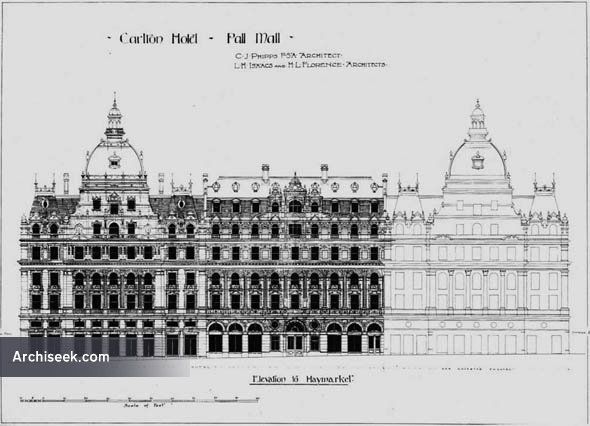 The Her Majesty’s Theatre adjacent, which still stands, is only indicated in these elevations. The architect was Charles John Phipps also, and the entire site was designed as an architectural setpiece.. The hotel was built in 1896 and demolished in 1959.

“This building occupies part of the area formerly covered by the Opera House first established in London, and known as Her Majesty’s Theatre. Part of the area occupied by the old Opera House and an adjoining club has been devoted to a new theatre, erected from the designs of the late Mr. C.J. Phipps, to which has been given the old name of Her Majesty’s Theatre. This new theatre occupies the northern portion of the site, and has frontages to the Haymarket, Charles- street, and the Opera-arcade. The remainder of the site has been utilised for the purposes of a hotel and restaurant, to which has been given the name of ” The Carlton.” This building has frontages to the Haymarket, Pall Mall, and the Opera-arcade. The entrance to the hotel is in the Haymarket, whilst the salon manger and restaurant are entered from Pall Mull. Taking these departments, for convenience sake, in inverted order, we would observe that the visitors pass from Pall Mall through a vestibule into an inner quadrangle, styled the Palm-court, which is covered with glass and is intended to serve for a lounge. At the end of the Palm-court, opposite to the Pall Mall entrance, is a terrace reached by marble steps, leading to the main foyer. This terrace is protected by a gilt railingspecially designed. The restaurant extends for the full width of the site from the Haymarket to the Opera-arcade. The north wall, faring the entrance, is artistically treated with a treillage which, in time, will be covered with foliage, whilst mirrors now reflect the effects of the room and its decoration. Private dining-rooms, for the entertainments of parties of from 20 to 40 in number, are also provided on this floor. A reading-room and a smokiog-room. the latter provided with an ingle fireplace, are also to be found on the ground floor. The grill-room is in the basement, approached by a separate staircase and entrance from the Haymarket. Coming now to the hotel proper, which contains 1100 rooms, including 72 suites each comprising two to six rooms, the visitors are received at the entrance hall, where will be found the inquiry and manager’s offices, and the passengers’ and luggage lifts. On the entresol floors are bed- rooms for visitors and accommodation for the managerial staff of the hotel. The upper floors have been so planned that suites of apartments, resembling flats in the accommodation they afford, are provided, containing three, four, or fire rooms, with bath-rooms, lavatories, and other conveniences. Throughout the building use has been made of asbestic plaster. Provisions satisfactory to the London County Council have also been made for rapid escape in case of emergency by staircases inside the building and an external iron staircase, which communicates with every floor from the roof downwards to the concrete flat over the opera arcade, from which iron ladders lead to Charles- street and Pall Mall. The keynote of the design externally was afforded by the late Mr. C.J. Phipps in the elevation for the Haymarket facade of Her Majesty’s Theatre, and this has been followed by Messrs. Isaacs and Florence, who, on his demise, were instructed to design and supervise the works necessary to complete the hotel. The building has been erected by Sir. Henry Lovatt, of Wolverhampton. The pavement lights are by Messrs. Hayward Brothers and Eckstein. The carving was executed by Mr. Margetson, of Bristol.” Published in The Building News, July 7 1899.