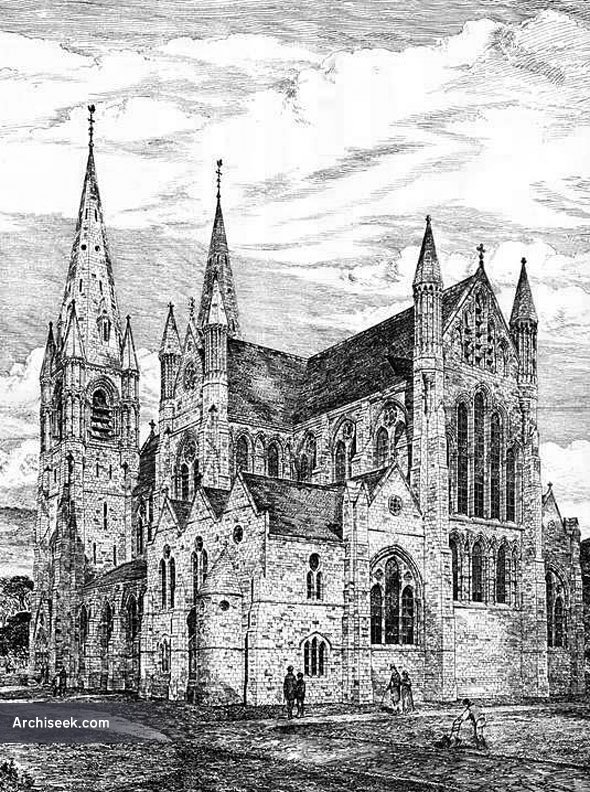 Perspective views as published in The Building News, December 19th 1879. “The church which we illustrate to-day is about to be erected on the site of the present inconvenient and ugly building which does duty as the important Parish Church of St. Mary, Woolwich. Our readers are already aware that 3. recent limited competition resulted in the selection of Mr. James Brooks’s design, and we have much pleasure in giving three double-page plates in illustrating so remarkable a work, which to our minds is equal to any of the notable designs which have been built by Mr. Brooks, and from time to time illustrated by him in our pages. It is to be hoped that every effort will be made to carry out the plan in its complete character, an event which would result in securing to Woolwich certainly one of the finest modem parish churches which we have recently seen. Our pages include a general interior, looking east, a ground-plan with views from the west and south-east. Our illustrations are reproduced from the competition drawings. The instructions received by Mr. Brooks stated that the drawings are to be “drawn to an eligible scale,” and a 3-16th scale was adopted, it being the scale Mr. Brooks usually uses in making his contract drawings. The present church being of a most substantial character, the walls and foundations below the groundline will be used in the new church, and the old materials will be built in the filling-in of the nave and other walls. By using the foundations and old materials a considerable saving will be effected. The accommodation provided consists of 1,003 adults and 68 children, making a total of 1,073. Two towers and spires are shown at the west end : one as a parish tower and one as a memorial to those who perished in the Princess Alice accident.”