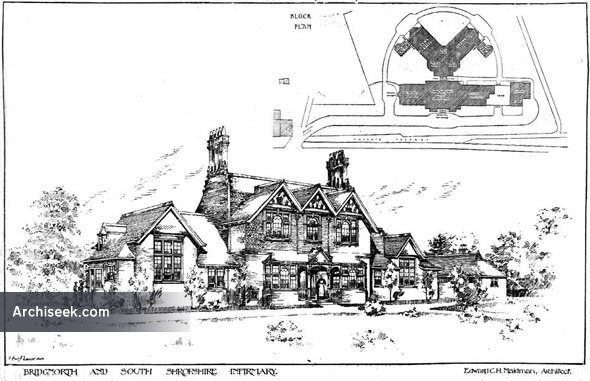 “This building is designed to accommodate eighteen patients — viz., eight in male ward, eight in female ward, and two in private ward. All the accommodation for patients is on the ground floor; on the south of the central block is the out-patients’ department, on the north is the kitchen department, with yard and detached laundry and mortuary block, while the wards are to the West, and connected to the central block by a cross- ventilated corridor ; the upper story of central block is devoted to nurses and servants. The alignment of the large wards was adopted for the purpose of allowing a more even distribution of sunlight than would result from keeping them in a straight line, and also for convenience of administration. The ventilation is attained by concealed roof ventilators and by fresh – air inlets through hot-water radiators. The building generally is heated by hot-water pipes and radiators, supplemented by fireplaces in each room. The infirmary is built of bricks, all external walls being of hollow construction and faced with Ruabon bricks, the upper floor being faced with tile-hanging, with the gables of central block being of oak framing and roughcast ; and the roofs are boarded, felted, and covered with brindled Broseley tiles. The con- tractor was Mr. R. Merton Hughes, of Birmingham, and the laundry fittings are by Messrs. Bradford and Co., of Manchester. Mr. Edward C.H. Maidman, of 13, South Charlotte-street, Edinburgh, is the architect, whose design was selected in a limited competition confined to architects of hospital experience, Mr. Alexander Graham, Past Vice-President of the Institute of British Architects, acting as assessor.” Published in The Building News, February 24, 1899.