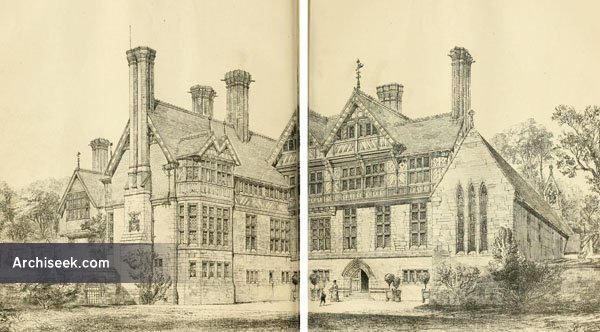 From The Building News: “THE Manor House of Preen, of which we this week give an illustration, lies between Shrewsbury and Much Wenlock, on the side of a valley which falls away grandly from the house, and rises on the opposite side, at a distance of about three miles, to the long high ridge known as Wenlock Edge. The house is on the site of a cell formerly in connection with Wenlock Abbey, and it was at first intended to incorporate portions of the old walls into the new building; but they proved to be so entirely decayed that this was found to be impossible, and. though portions of the new house occupy the same site as the old. no portions of the old walls exist.

The parish church, to which the house is actually attached (and from which it gets the name of Church Preen), is of very startling proportions, being upwards of 70ft. long, by only 12ft. wide, inside. It was carefully restored some four or five years ago. On the north side is the churchyard, raised on a high level, and chiefly remarkable for an extremely large old yew, unfortunately in a very decayed state.

The approach to the house winds through a beautiful wood. The entrance-door is on a low level, and a wide stone stair leads up to the principal floor. On the ground-floor are the billiard-room, business-room, lavatories, and [housekeeper’s and butler’s departments, whilst in the rear, and on a slightly higher level (so as to suit the fall of the ground) are the kitchens and offices connected there- with.

The principal floor contains a hall and staircase, from which enter the drawingroom and library. The large bay window in our illustration is on the north side of the drawing-room, and commands a fine view of a hanging wood adjoining, whilst a corresponding bay to the south overlooks the flower gardens and more distant landscape. Corridors lead right and left from the centre hall, one to the dining-room (the three lofty windows of which are shown in our view), the other to a music-room of large size, chiefly lit by a window at one end. opening into a terrace about 120ft. long, from which magnificent views over the valley are obtained. The kitchen garden is on one side of this terrace, and separated from it by the high wall, a bay or two of which is shown.

Numerous bed and dressing-rooms occupy the upper floors, from nearly all of which fine views are obtained. The house is built of local stone, with dressings from the Longnor quarries. The gables and half-timbered work are of oak, and in parts are richly moulded. The chimneys are of cut and rubbed red brick, and, as may be inferred from the drawing, are enormous. The roofs are of red Staffordshire tiles. The house will have an ample water supply from a large reservoir, fed by springs, on the high land in the rear, and at a distance of about half a mile, and it will be lit by gas from an apparatus placed down in the valley. The corridors, stairs, and principal rooms will be heated by hot-water coils, in addition to the open fire-places. There are extensive stables and outbuildings at the back, and a good range of greenhouses in the kitchen garden, a large fernery, and a conservatory.

The architect of the building is Mr. R. Norman Shaw, and the illustration, as given by us, is a photo-litho. reproduction of Mr. Shaw’s admirable drawing, which many of our readers no doubt saw this year at the Roval Academv.”