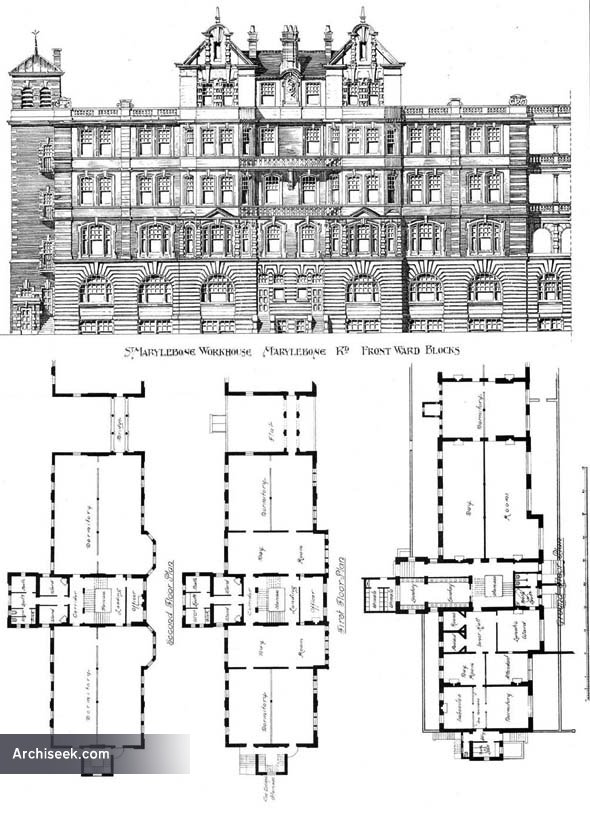 A major phase of new building took place in 1897-1901 at the St. Marylebone Workhouse. This comprised two five-storey blocks for aged and infirm males at the north fronting onto Marylebone Road (illustrated) and a new central administrative block at the east on Northumberland Road. The administrative block also contained the main chapel, and included the demolished building’s clock, bells, and foundation stone inscribed ‘ST. MARYLEBONE WORKHOUSE FOR THE POOR BEING LAME IMPOTENT OLD AND BLIND ERECTED IN THE YEAR MDCCLXXV’. Demolished in 1965.

“These buildings, now in course of erection, comprise two large double-ward blocks, connected on the ground floor and basement. Each block will be three stories in height, above the ground floor, with a fourth story over the centre part. The top and third floors will contain wards and day- rooms for infirm men too feeble to leave them. The roofs over the wings will, however, be flat, and available for such of these inmates as may be able to take advantage of them. The second floor will contain dormitories only, and the first dormitories and two large day-rooms. The outer wing of both blocks will contain on the ground floor accommodation respectively for male and female imbeciles and lunatics, the inner wings being divided into two large general day-rooms. The centre rooms between the blocks on this floor will be occupied as an overflow dormitory. The total accommodation will be 555 beds for old and infirm men, 11 male and 10 female imbeciles, and three male and three female lunatics. The basements are divided into a number of large rooms, the effective lighting and ventilating of which is insured by the wide areas, both back and front, and, in addition, the levels of the ceilings will be 4ft. above the general ground level. These rooms will be devoted to a complete set of workshops. The centre part of each block contains the general staircase, which will be lined throughout with white glazed bricks. Ample light and ventilation is provided by a large lantern and skylights. Adjoining these staircases on each floor are officers’ rooms and small one-bed dormitories ; the towers in the rear contain the bathrooms, lavatories, w.c.’s, &c. Airing yards, properly divided for classification, wiU be formed both at the back and front of the buildings. The walls of all dormitories will be finished with cement dadoes 4ft. Tin. high and plaster above. The day-rooms will have glazed brick dadoes. All bathroom? and lavatories will be lined with white glazed tile dadoes 7ft. high, and the w.c.’s, &c., will be faced their whole height with white glazed bricks. The front of the building and returns will be faced with hard faced red bricks relieved with stone bands and dressings ; the ground-floor story will, however, be entirely in rusticated stone. The back elevation will be faced with white pressed bricks, relieved with red bands and arches to match the adjoining older buildings. The work is being carried out at a cost of £52, 100 by Messrs. G. H. and A Bywaters and Sons, from the designs of Mr. A. Saxon Snell, F.R.I.B.A., architect. The quantity surveyors are Messrs. Northcroft, Son, and Neighbour, and the clerk of works is Sir. Frederick W. Lee.” Published in The Building News, December 9 1898.