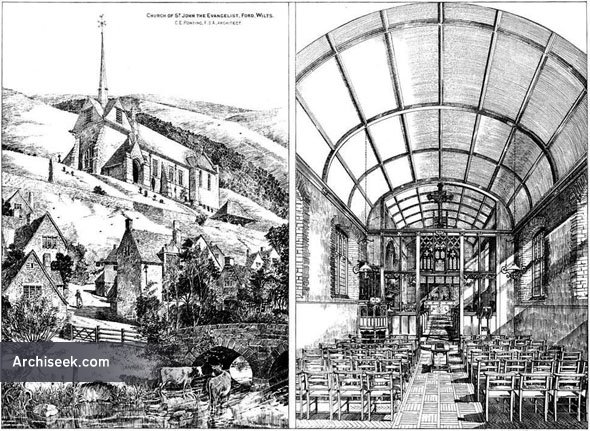 “This church, which has been built for the Rev. F. Harrison, occupies an exceptionally picturesque site on the hillside above the “By-Brook,” at Ford, five miles from Chippenham. It is built entirely of stone, with Chapel Knapp rustic-faced walling, and Bath stone dressings, and the roofs are covered with Ruabon tiles, except the spire, which has cleft-oak shingles instead.

A lych-gate of oak, and tile-covered, opens from the road to a sloping path up to the porch, which has a barrel-vaulted ceiling, most of the nave is paved with wood blocks, and the remainder of the church with tiles. The internal walls are plastered, except where the stone reveals and arches to doors and windows are allowed to appear. An unusual feature in the building is the slope of the nave floor from west to east, following the natural fall of the site. The church is arranged to seat 170 worshippers, and has cost about £2,300. It is warmed by a Musgrave stove, and fresh-air inlets are provided in the window-sills.

All the internal woodwork is painted olive-green, parts of the screen and chancel ceiling being gilded. .\n altar frontal has been given by Mrs. Walmesley, and has been worked by the Sisters of St. Katherine’a School of Embroidery. The dossal hangings and curtains are of velvet and serge. The niihe in the largo buttress on the south side contains a statue of St. .John, carved by Mr. Harry Hems, from a cartoon furnished by the architect, Mr. C. K. Pouting, of Marlborough. Messrs. Jacob Long and Sons, of Bath, wore the builders.” Published in The Building News, December 30 1898.