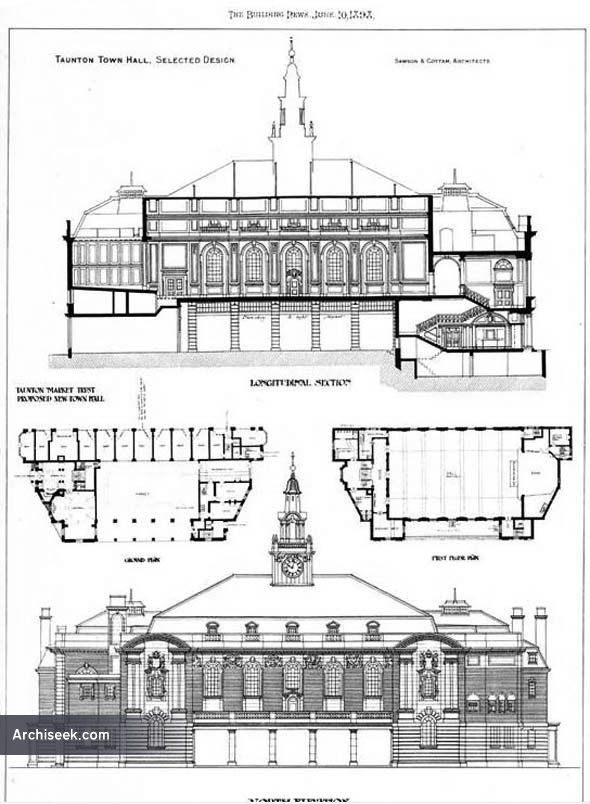 Selected design from architectural competition to design a new town hall. “Messrs. Samson and Cottam, architects, Taunton, are the authors of this design, which has been chosen for execution, and they were awarded the first premium of £100. The second prize of £50 was given to Mr. J.M. Brydon, F.K.I.B.A., of London, for the set marked ‘ X,” and the third of £30, was taken by Mr. H. T. Hare, of London, for the set marked ” L.” The other competitors were as under : — Set B, Messrs. Tapper and Crouch, London ; set C, Messrs. Silcock and Reay, Bath ; set D, Mr. R. Knill Freeman, Bolton; set E, Messrs. Gibson and Russell, London ; set F, Messrs. Mallows and Grocock, of Bedford ; set H, Mr. W. H. Crease, of Bristol ; set I, Mr. G. Elkington, London ; set J, Messrs. Murray and Foster, London : set K, Mr. C. Henman, London. The following description, drafted from particulars, has been sent us by the authors of the selected design. The building is in the Renaissance style, and possesses many notable features. When erected on the Parade it will form a distinct ornament to the town, and will at the same time provide the convenient rooms and offices which are so necessary to the municipality. A remarkable and novel feature is a triforium on each side of the hall. 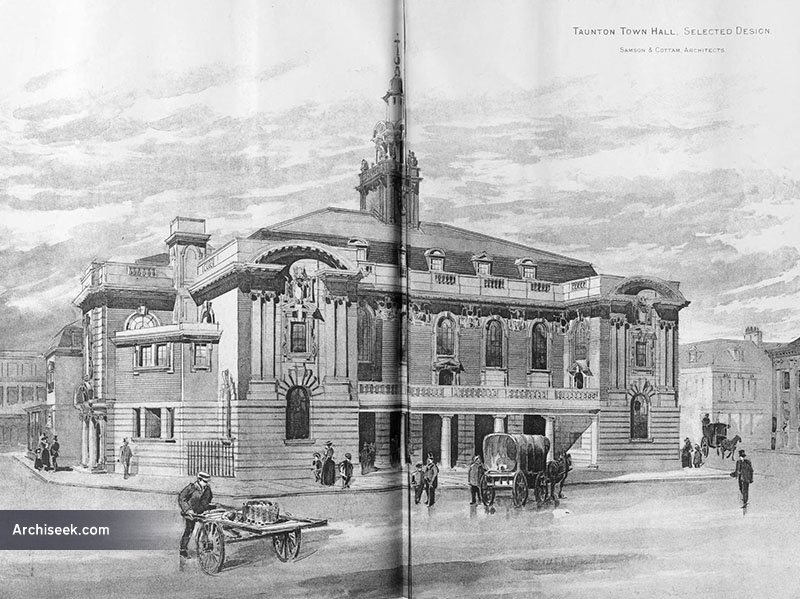 The arrangements adopted in the design can best be gathered by a consideration of the plans of the several floors. It may be pointed out that on the ground floor the market is placed in the centre of the north front, facing the Parade, and that the main entrance to the town-hall and the guildhall is placed to the east, while the offices, &c., of the trustees’ present tenant are situate to the west of it. The arrangement of the east and west wings is so nearly symmetrical and equal in size, that it would be quite feasible, if thought desirable, without materially altering the principle on which the design is planned, to transpose them and to place the principal entrance and guildhall on the west of the block, so that they would come opposite the approach from Corporation-street, as well as High-street, North-street, \c. This may be thought more desirable, as the street is much wider here than on the east side. This, however, OS merely a matter of arrangement and convenience of plan best adopted to meet the views and requirements of all parties, which can be adopted without departing from the spirit of the design. Great care has been bestowed on the proper planning of approaches and exits, which, it is believed, will be found convenient and safe. It is suggested that the two subsidiary staircases as a general rule should be used for exits only, though it might on certain occasions be useful to employ them for purposes of entrance, either as early doors or approaches to reserved or cheap sides. Ticket offices and a men’s and women’s lavatory have therefore been shown in connection with them. Space has been left for the shops facing south, as directed. It is submitted that it might be advisable to omit one shop, and form a convenient approach to the market from the south in place of it. No lavatory accommodation has been provided in connection with the market and shops ; should such provision be thought desirable, it is considered that it would practically amount to providing public lavatories, which would not only be beyond the scope of the scheme, but for which a better site could probably be found elsewhere in close proximity to, but not necessarily in connection with, the new buildings.

A sentence may, perhaps, be devoted to indicating the method of construction which it is proposed to adopt in the roof and to carry the clock-turret. There will be two strong longitudinal steel lattice girders forming trussed purlins, which will do the duty of the transverse tie-beam trusses usually employed. These permit of the formation of a coved ceiling to the hall, and leave on either side a sort of triforium, or gangway, already referred to, which will have several important uses as it will give access to the clock-chamber and ventilating turret, also to the gutters and over the whole space between ceiling and roof for access to electric lighting or other wires. It will further permit of opening, closing, etc, the dormer windows without the employment of un- sightly and unworkable cords or gearing, and consequently of the regulation of ventilation without disturbing the audience or diminishing the air space of the hall, and will to a great degree dispense with the use of ladders in decorating the hall. Strong steel cross-ribs will be introduced as required to complete the roof construction. The sum at disposal is not sufficiently large to permit of any great outlay upon the several facades of the new building. These have, therefore, been kept plain, and reliance for effect is placed, upon the disposition of the several parts and a broad treatment of the whole mass. In view of the great distance from which the building, especially the north or principal front, can be seen, it is considered this will be found more truly artistic and effective than a treatment of the front in small parts and the elaboration of minute details. With regard to the materials to be employed, it is proposed that the front be con- structed of red bricks in thin courses with Hamhill stone or terracotta dressing. The roof will be slated. The internal walls and ceilings generally will be plastered, and the cornices and decorations are to be of wood, the whole of the staircases of fireproof construction in concrete.

The stage, orchestra, and accessories generally are those usually provided in modem buildings of this description. Having regard to the various uses to which the hall is likely to be put, it is suggested that the sides and ceiling of the stage should be constructed of light frame- work made easily removable, giving ample space for wings and flies when the hall is to be used for theatrical performances. The question of heating and ventilation has been most care- fully considered in preparing the scheme, though nothing is allowed for the former in the estimate appended. It is proposed to heat the new building by means of hot-water circulating pipes on the high pressure system, the heat being distributed by means of radiating coils fixed in suitable recesses beneath the windows or elsewhere as may be desirable. The ventilation will be induced by the introduction of warm air over these coils and by the extraction of the foul air at the ceiling level of the hall and guildhall and elsewhere, from which it will be taken out in shafts around smoke-flues and also through the dormers, and the fleche containing the clock as before described. It is submitted that the arrangements thus indicated will provide a well- warmed and ventilated building under all ordinary conditions. Mr. Edward W. Mountford, F.R.I.B.A., acted as professional referee, and his award was unanimously adopted. Wo hope shortly to illustrate the two other premiated designs.” The Building News, June 10, 1898.