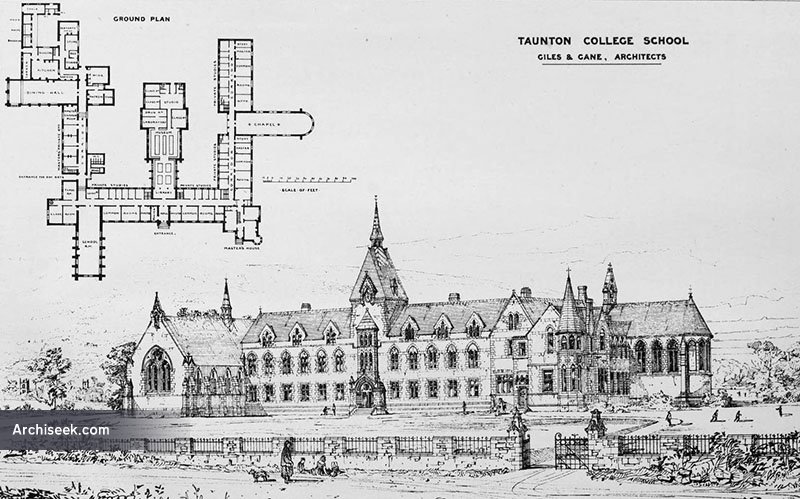 Previously called Taunton College School when it was moved from its site in Corporation Street to South Road in 1869. In 1879 educational pioneer, Canon Nathaniel Woodard, bought the school and renamed it King’s College. The building was designed by C.E. Giles and built between 1867 and 1869. A new chapel followed in 1903 designed by W.E. Tower. It has been designated as a Grade II listed building.

“The new buildings for the above school originally founded 1322 and incorporated with a preparatary school 1S67 were built from designs prepared in the office of Messrs, Giles and Robinson. architects (now Giles and Gane. of No. 7, Furnival’s Inn, K.C. The buildings are of Mouckton stone, lined internally with brick, the encasings being of Corsham Down and Ground Bath stone, and are covered with slates in two tints, green and purple ; the corridors and staircases are of stone. The whole of the plan is not vet completed ; only the front, comprising common and master’s rooms, studies and vestibules with dormitories over, schoolroom, dining-hall, offices in connection therewith, &c., have been executed, leaving the headmaster’s house, the right wing, chapel, and museum and science classrooms to be completed at a future date. Mr. John Spiller, of Taunton, was the builder. When the design is completed the College will consist of a very complete suite of buildings, and it is intended hereafter to form in connection with it a middle-class county school, under the superintendence of the same headmaster, on the same site, but otherwise distinct from it.” Published in The Building News, November 13 1874.