Architecture of Isle of Wight 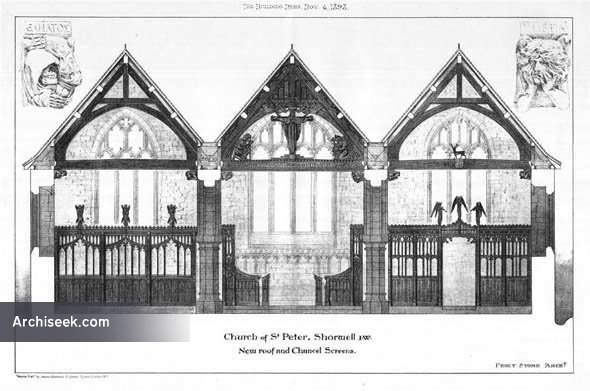 “Most visitors to the Isle of Wight know the church of St. Peter at Shorwell, as it practically abuts on the coach road between Yentnor and Freshwater. In 1896 the vicar consulted me about the state of the roof, which, on inspection, I found so rotten that a new covering to the church became absolutely and immediately necessary. In designing the new roof I have kept it open to the ridge, thus increasing the height of the church — a great gain artistically. It is oak throughout, with the exception of the boarding, which is of deal, with oak moulded fillets to cover the jointing. The chancel tie has been made into a rood beam, the detail of which speaks for itself. The two kneeling figures represent the archangels Michael and Gabriel. The corbels of Sin and Death supporting the beam are carved, the one in Irish limestone, the other in Hopton Wood, partly polished. The screens inclosing the north court and west court chapels are not yet in position. They are to form memorials to the Leith and Gordon families. Mr. Jenkins, of Newport, I.W., was the contractor for the work, and the carving has been admirably carried out by Messrs. Nicholls, of Wincott-street, S.E.,_a successful endeavour having been made on their part to break away from the commonplace, according to my desire. The drawing was exhibited in this year’s Academy. Percy G. Stone.” Published in The Building News, November 4 1898.