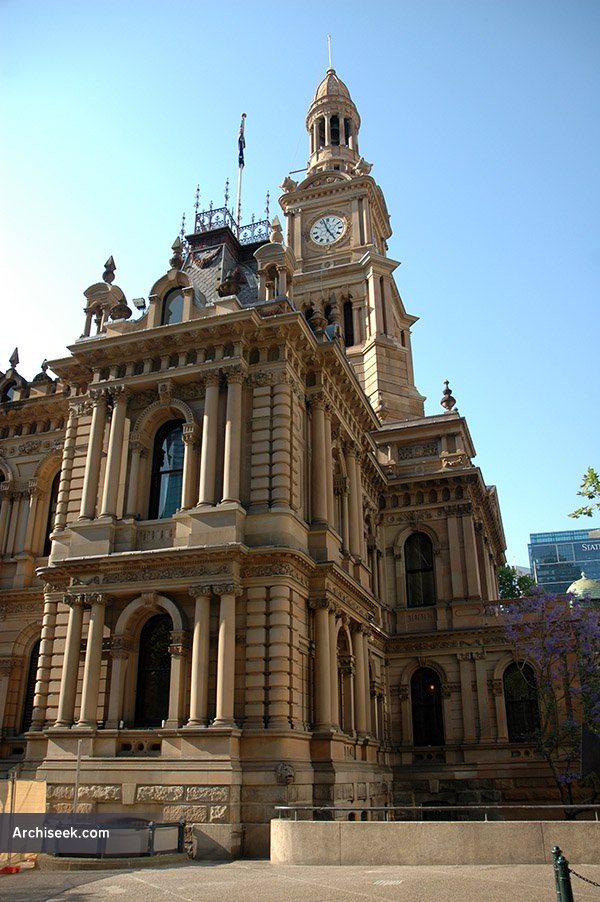 In architectural style, the Sydney Town Hall is French Second Empire, deriving inspiration for its motifs, roofscapes and elaborate interiors from the Louvre and Hotel de Ville in Paris and chateaux around Paris and in the Loire Valley. The exterior of the building is built primarily from Sydney “˜yellowblock’ sandstone and elaborately carved by stonemasons. The building has a slate roof and was originally surrounded by landscaping and a palisade fence. When complete, the building had a large porte-cochere over the present (rebuilt) steps, and its own ring road inside a stone and iron palisade. Unfortunately, this area was destabilised in 1934 during tunnelling for the underground railway and the formal entry had to be demolished.

The building was built in two main stages the first being the vestibule and offices (1869 – 1880) and the second being the two halls (1880 – 1889). he “Great Hall” by Charles Sapsford – which was officially named the Centennial Hall, but referred to in its day as the Place of Democracy – was an engineering triumph, involving a highly structured roof system to meet the span. The ceilings are lined with an early use of the Wunderlich metal panel system, chosen to overcome the fear of plaster panels falling on patrons from vibration caused by the immense organ which still functions.

The Town Hall was temporarily occupied in 1875 however the finishing of the ground floor rooms was not undertaken until 1878 and the finishing of the second floor rooms was undertaken to coincide with the opening of the Main Hall. The decoration of the ground floor chambers and corridors of the first stage was designed by David McBeath and the decoration of the Vestibule by Albert Bond.