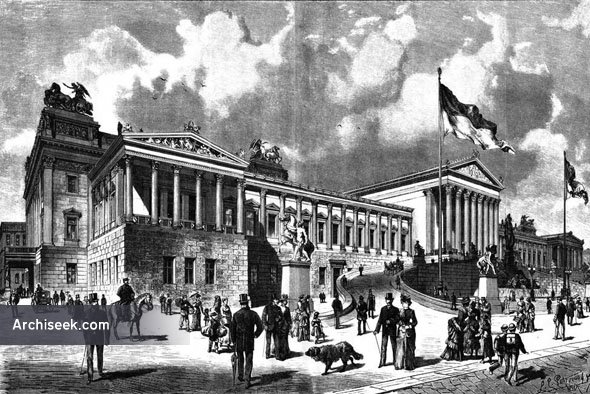 The fountain with the statue of Athena in front of the building was designed by Baron Hansen as well, but only completed in 1898 to 1902.

Half of the building suffered heavy damage or was destroyed, such as the former Lords Chamber and the Hall of Columns, by Allied bombs in the course of the Second World War.
After the war Max Fellerer and Eugen Wörle were commissioned as architects to redesign and readapt the former Lords Chamber for the National Council, in the process the meeting room of the National Council was rebuilt in a modern and functional style. Work on the National Council Chamber was completed in 1956. The original appearance of the other publicly accessible premises and the building’s external appearance were largely restored to von Hansen’s design, such as of the Hall of Columns.