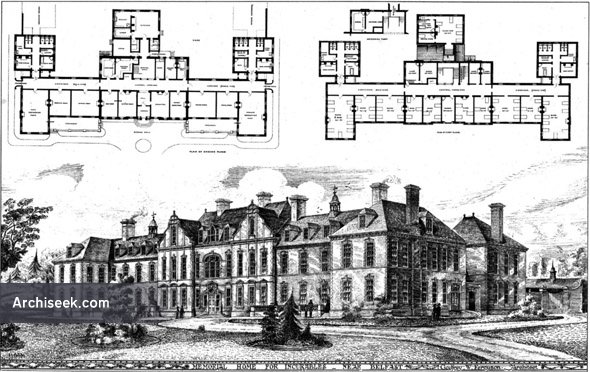 This fine building was erected in 1885 as “Thompson House for the Incurables”, named after a local surgeon (William Thompson MD) who had tragically died three years earlier. Endowments kept the home free for ‘inmates’ until 1930, when a small fee was introduced. The home passed into state hands in 1963, to what was then the “County Antrim Health Committee”. After a period of closure and major renovations, it reopened as “Thompson House” in 1967.

As published in The Building News, April 18th 1884: This building. the plans and perspective view which we illustrate this week. is at present being erected to the memory of the late Dr Thompson FRCSI MD. It is situated on a rising ground overlooking tho town of Lisburn, County Antrim and commands a fine view of the surrounding country. The building is to accommodate 62 patients, and is so arranged to admit of easy extension. A corridor 10ft wide, runs the entire length of the building from east to west, and is divided into three parts glass screens, which separate the male side at west, and the female side at the east, from administrative in the centre. The wards are on the first floor and face the south, except cancer ward, which is necessarily isolated. The ground floor contains recreation rooms, dining rooms, matron’s apartments, stores, &c. The kitchen and offices are in a separate block, separated from principal staircase, which entirely of oak by a well ventilated passage. An arcade supported on Irish marble shafts and Portland stone carved capitals divides the staircase from main corridor. Ihe servants and nurses rooms are in the attic of centre portion. Tho wc`s, bath rooms, lavatories, and kitchens are in buildings by themselves, separated by ventilated lobbies from the main corridors. The entrances at either end of corridor have inclined planes and will enable the patients to wheel themselves to the grounds. The verendahs facing the south are reached from the recreation rooms through casement windows.

Belfast red perforated bricks and Dumfries are red sandstone being used for outside walls. An hydraulic lift will be supplied to work from ground to attic floor and is being supplied by Messrs Waygood of Falmouth Road S E. The building when completed will be probably lit by the electric light.

The laundry and washhouses, out houses &c will be built parallel with the back wall of kitchen and will form one boundary to the yard. The ground on which the building stands nine acres, and will be planted and laid out in garden and walks. The home is expected to be opened in the autumn of this year. The work is being carried out by Mr Robert Corry from the plans and under the superintendence of Mr Godfrey W Ferguson of Belfast. Mr Peter Butler of Monkstown is the clerk of works. Our photo-lithograph is taken from a drawing was exhibited in the Cork Exhibition last year.