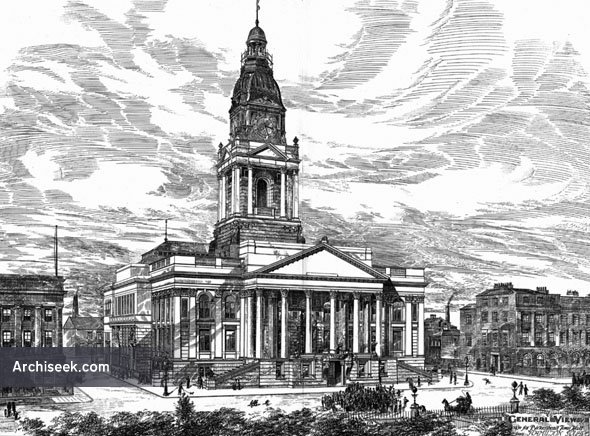 When Hamilton Square in Birkenhead was designed in the early 19th century, a plot of land was made available for the siting of a town hall between Hamilton Street and Chester Street. However, it wasn’t until 1887 that the current building was completed. Designed by local architect Charles Ellison in 1882, the building was constructed using Scottish granite and local sandstone. The building consisted of a council chamber, offices, with a concert hall and function rooms known as the Assembly Rooms. Birkenhead’s magistrates’ court chambers are located in a separate building to a similar design to the rear. The clock tower is 200 feet in height, after a fire in 1901, the upper part of the clock tower was rebuilt to a design by Henry Hartley. General view from Hamilton Square published in The Building News, November 3rd 1882.