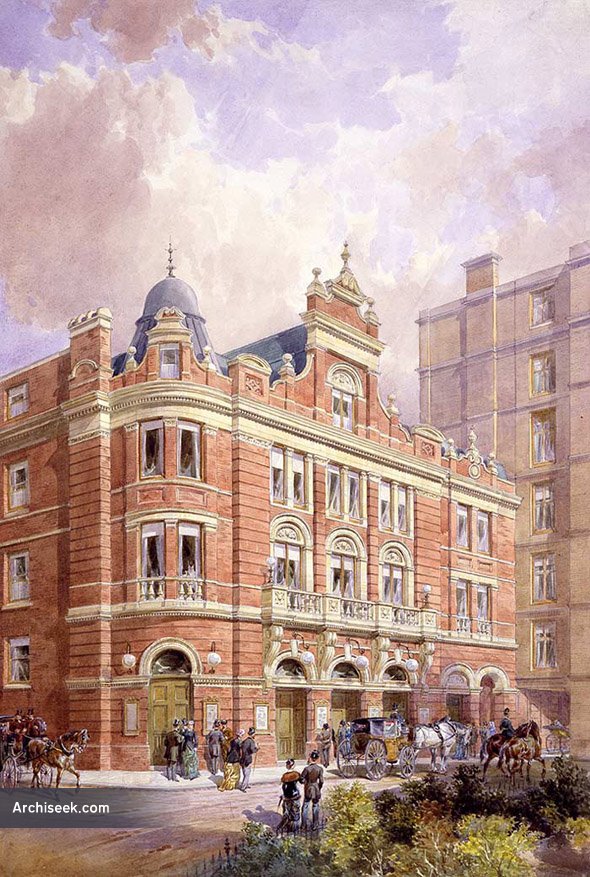 Richard D’Oyly Carte bought the site of the former Savoy Palace (later the Savoy Hospital) in 1880 to build the Savoy Theatre specifically for the production of the Gilbert and Sullivan operas, of which he was the producer. The theatre was the first theatre, and the first public building in the world, to be lit entirely by electricity. In 1889, Richard D’Oyly Carte built the Savoy Hotel next to the theatre. Richard’s son Rupert rebuilt and modernised the theatre in 1929, and it was rebuilt again in 1993 following a fire. It is a Grade II* listed building.

Design of the theatre was given to C. J. Phipps. The builders were Patman and Fotheringham. Plans were drawn up and executed with speed and efficiency. Nonetheless, the advertised opening date had to be put back several times while the innovative electrical work was completed. Carte had at one time intended to call it the Beaufort Theatre, but he announced in a letter to The Daily Telegraph in 1881, “On the Savoy Manor there was formerly a theatre. I have used the ancient name as an appropriate title for the present one.”

Drawing published in The Building News, April 1st 1881. “The illustration shows the frontage towards the Victoria-Embankment of the new theatre now being erected for Mr. R. D’Oyly Carte, from the designs of Mr. C. J. Phipps, P.S.A. The other approaches are in Beaufort – buildings, Strand; and as the theatre is isolated on all sides, there is great facility for entrance and exit. The materials used are red brick and Portland stone.”