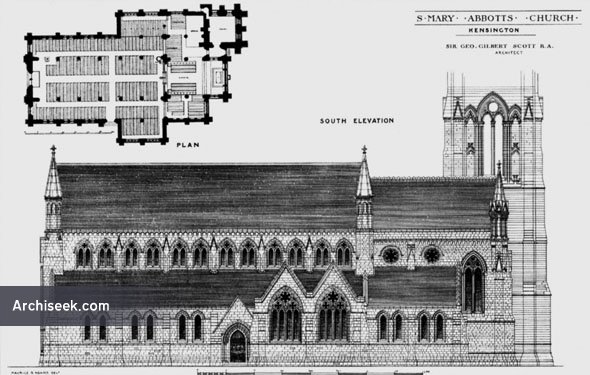 Designed by the celebrated 19th Century architect Sir George Gilbert Scott and built in 1872, is one of the finest examples of Victorian Gothic style. It houses the tallest spire in London as well as fine stained glass windows. Illustrations of the south elevation including ground plan, and west front published in The Building News, February 18th 1881.

“This church has only within the last few months been completed by the erection of the tower and spire but the main portion of the building was completed about ten years ago. It is one of the largest churches built by Sir Gilbert Scott, and is certainly the most conspicuous as well as satisfactory church from his designs erected in London. A set of working drawings of so important an example of ecclesiastical architecture cannot fail to be of interest, and we have therefore arranged to illustrate the building rather fully, more especially the tower and spire, which were among the last designs prepared by Sir Gilbert Scott before his death. To-day we publish the south elevation and plan, with a detailed elevation of the west front. Other illustrations will follow, when we may be enabled to furnish further particulars of the church. The erection of the tower and spire was carried out under the supervision of Mr. John Oldrid Scott, F.R.I.B.A.”